Five deranged CIA killers break out from a secret insane asylum for retired agents... James Grady revolutionized thrillers with his first novel 'Six Days of the Condor'. Now Grady breaks out of all genre limitations with 'Mad Dogs', a stunning novel launched from a totally original creation: the CIA's secret insane asylum for retired agents. Five deranged CIA killers, all of them dependent on their meds, and deep in the woods of Maine, are forced to break out when someone murders their psychiatrist. Like the central character of 'Motherless Brooklyn', they operate under somewhat skewed perceptions of the real world. Their training, however, has prepared them to survive in an unfriendly world - even if that world is the Boston to Washington corridor as they chase down the real killer. 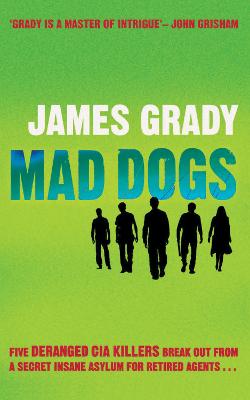 James Grady has published more than a dozen novels, a handful of short stories, and worked in both feature films and television. His first novel, Six Days of the Condor, was made into the classic Robert Redford movie Three Days of the Condor. Grady has been both US Senate aide and a national investigative reporter. His accolades include France's Grand Prix du Roman Noir (2001) and Italy's Raymond Chandler Medal (2003), Japan's Baku-Misu award for literature, and he was named as one of The Telegraph's 50 crime writers to read before you die. He has two children and lives with his wife inside ...