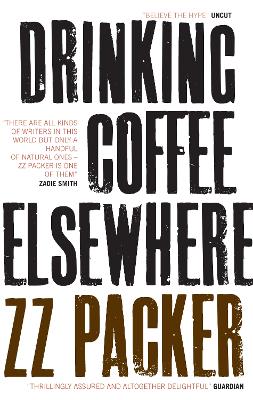 A black, motherless loner tries to come to terms with her radically unfamiliar surroundings as a Yale freshman; 14-year-old church girl Tia runs away to the big city; a bright young man makes a last-ditch attempt to understand his loser father on the Million Man March in Washington DC; at summer camp, an all-black Brownie troop decide to teach a troop of white Brownies a lesson for a racial insult they think they overheard. Teeming with life, Drinking Coffee Elsewhere is a collection that explores what it is to be human. Never neatly resolved, these provocative and unforgettable stories resonate with honesty and wry humour and introduce us to a major new talent.

ZZ Packer is a recipient of a Whiting Writers' Award, a Rona Jaffe Foundation Writers' Award and was selected for the New Yorker's summer fiction debut issue in 2002. She was named one of Granta's Best of Young American Novelists in 2007, and her collection of stories, Drinking Coffee Elsewhere, was a New York Times Notable Book and the winner of a Commonwealth Club Fiction award. A graduate of Yale, she has been a Wallace Stegner-Truman Capote fellow and a Jones lecturer at Stanford University. Her work has appeared in the New Yorker, Harpers, the New York Times Magazine, the New York Times Book Review and Salon. She lives in the San Francisco Bay area. @zzpacker

More About ZZ Packer
Add To Wishlist
Buy from our bookstore and 25% of the cover price will be given to a school of your choice to buy more books.