From the author of the international Bestseller Breath Covering a diving championship in Greece on a hot and sticky assignment for Outside magazine, James Nestor discovered free diving. He had stumbled on one of the most extreme sports in existence: a quest to extend the frontiers of human experience, in which divers descend without breathing equipment, for hundreds of feet below the water, for minutes after they should have died from lack of oxygen. Sometimes they emerge unconscious, or bleeding from the nose and ears, and sometimes they don't come up at all. The free divers were Nestor's way into an exhilarating and dangerous world of deep-sea pioneers, underwater athletes, scientists, spear fishermen, billionaires and ordinary men and women who are poised on the brink of some amazing discoveries about the ocean. Soon he was visiting the scientists who live 60ft underwater (and are permanently high on nitrous dioxide), swimming with the notorious man-eating sharks of Reunion and descending thousands of feet in a homemade submarine. And on the way down, he learnt about the amazing amphibious reflexes activated in the human body under deep-water conditions, why dolphins were injected with LSD in an attempt to teach them to talk, and why sharks like AC/DC. The sea covers seventy per cent of Earth's surface, and still contains answers to questions about the world we are only beginning to ask: Deep blends science and adventure to uncover its amazing secrets.

Freediving is deep-sea diving without the use of oxygen tanks. Human beings should not be able to dive 300 feet and survive, and when the author reports on the 2011 Individual Depth World Championship, he sees injuries ranging from nosebleeds to cardiac arrests. However, by and large the competitors emerge unscathed. Thus begins his own life-long love affair with freediving and he gives powerful descriptions of how it feels to walk unencumbered along the seabed at extraordinary depths, enjoying a natural interaction with sharks and dolphins. 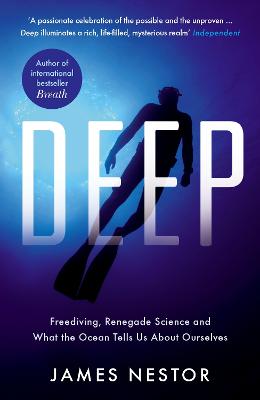 James Nestor has written for publications including Outside Magazine, The New York Times, Men's Journal and San Francisco Chronicle Magazine. An inveterate adventurer, Nestor joined a doomed surfing expedition to Norway and Russia, in which he and his team became the first to ride the breaks of the Arctic Circle. He has travelled extensively in Central America and the South Pacific. He lives in San Francisco.

View All Books By James Nestor