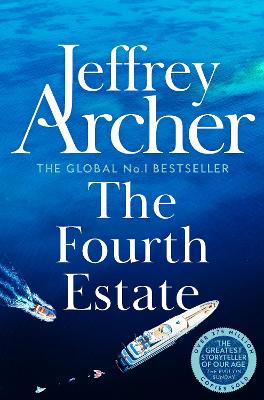 Engrossing and addictive, No#1 Bestseller Jeffrey Archer's The Fourth Estate sees two newspaper barons in a battle for supremacy and power. Two men who seem to have little in common aside from their desire to stay at the top of their game. One, Richard Armstrong, born in poverty, survived the Second World War through luck, guts and being ruthless before buying a failing German newspaper while putting his competitors out of business. The other, Keith Townsend, raised in wealth, took over his family's business, his brilliance soon making him the most successful newspaper publisher in Australia. Now their ambitions are about to collide as each find themselves threated by financial disaster. In a race to save their crumbling empires, each man must find a way to remain on top and take control of the greatest media conglomerate in the world. Only one can triumph. Which one will it be? With Archer's trademark twists and turns, this is a powerful tale set in the newspaper world of wealth and corruption, desire and destruction. 'Probably the greatest storyteller of our age' - Mail on Sunday

Jeffrey Archer, whose novels and short stories include the Clifton Chronicles, Kane and Abel and Cat O' Nine Tales, is one of the world's favourite storytellers and has topped the bestseller lists around the world in a career spanning four decades. His work has been sold in 97 countries and in more than 37 languages. He is the only author ever to have been a number one bestseller in fiction, short stories and non-fiction (The Prison Diaries). Jeffrey is also an art collector and amateur auctioneer, and has raised more than GBP50m for different charities over the years. A member of the House of Lords for over a quarter of a century, the author is married to Dame Mary Archer, and they have two sons, two granddaughters and two grandsons.

More About Jeffrey Archer
Add To Wishlist
Buy from our bookstore and 25% of the cover price will be given to a school of your choice to buy more books.