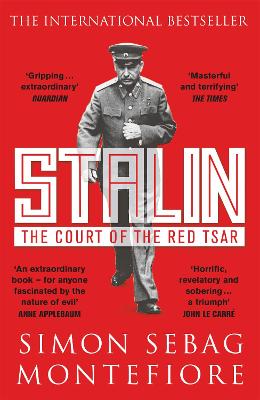 Winner of the British Book Awards History Book of the Year Longlisted for the Samuel Johnson Prize This thrilling biography of Stalin and his entourage during the terrifying decades of his supreme power transforms our understanding of Stalin as Soviet dictator, Marxist leader and Russian tsar. Based on groundbreaking research, Simon Sebag Montefiore reveals in captivating detail the fear and betrayal, privilege and debauchery, family life and murderous cruelty of this secret world. Written with extraordinary narrative verve, this magnificent feat of scholarly research has become a classic of modern history writing. Showing how Stalin's triumphs and crimes were the product of his fanatical Marxism and his gifted but flawed character, this is an intimate portrait of a man as complicated and human as he was brutal and chilling.

Simon Sebag Montefiore is the internationally bestselling author of prize-winning books that have been published in forty-eight languages. CATHERINE THE GREAT & POTEMKIN was shortlisted for the Samuel Johnson Prize; STALIN: THE COURT OF THE RED TSAR won History Book of the Year Prize at the British Book Awards; YOUNG STALIN won the Costa Biography Award, the LA Times Book Prize for Biography, the Kreisky Prize and the Grand Prix de la Biographie Politique; JERUSALEM: THE BIOGRAPHY won the JBC Book of the Year Prize and the Wenjin Book Prize in China; THE ROMANOVS: 1613-1918 won the Lupicaia del Terriccio Book Prize. He is the author of the Moscow Trilogy of novels: SASHENKA, RED SKY AT NOON and ONE NIGHT IN WINTER, which won the Political Fiction Book of the Year Award. He is also the author of WRITTEN IN HISTORY: LETTERS THAT CHANGED THE WORLD and VOICES OF HISTORY: SPEECHES THAT CHANGED THE WORLD.

More About Simon Sebag Montefiore
Add To Wishlist
Buy from our bookstore and 25% of the cover price will be given to a school of your choice to buy more books.