A Traitor to Memory

Part of the Inspector Lynley Series

A Traitor to Memory Synopsis

Twenty-eight-year-old virtuoso violinist Gideon Davies has lost not only his memory of music but also his ability to play the instrument he mastered as a five-year-old prodigy. All he can remember is a single name: Sonia. Then, one rainy evening, Gideon's mother Eugenie travels to London for a mysterious appointment. But before she is able to reach her destination, a car swoops out of nowhere and kills her in the street. In pursuing Eugenie's killer, Lynley and Havers come to know a group of people whose lives are inextricably connected by a long-ago death, a trial, and a prison sentence handed down as retribution for a crime no one has spoken of for twenty years. 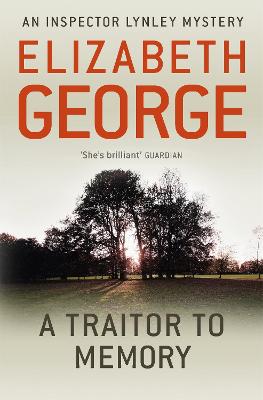 Elizabeth George is the author of highly acclaimed novels of psychological suspense. She won the Anthony and Agatha Best First Novel awards in America and received the Grand Prix de Litterature Policiere in France. In 1990 she was awarded the prestigious German prize for international mystery fiction, the MIMI. Her novels have now been adapted for television by the BBC. An Edgar and Macavity Nominee as well as a New York Times and international bestselling author, Elizabeth George lives on Whidbey Island in the state of Washington. Visit Elizabeth's website at www.elizabethgeorgeonline.com