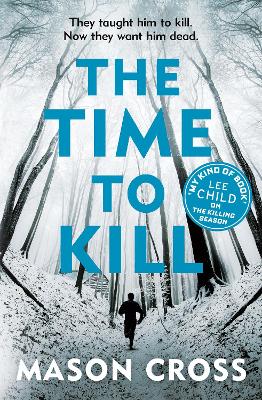 The Time to Kill

The Time to Kill Synopsis

THEY TAUGHT HIM TO KILL. NOW THEY WANT HIM DEAD. 'One of the best new series characters since Jack Reacher' Lisa Gardner * It's been five years since Carter Blake parted ways with top-secret government operation Winterlong. They brokered a deal at the time: he'd keep quiet about what they were doing, and in return he'd be left alone. But news that one of Blake's old allies, a man who agreed the same deal, is dead means only one thing - something has changed and Winterlong is coming for him. Emma Faraday, newly appointed head of the secret unit, is determined to tie up loose ends. And Blake is a very loose end. He's been evading them for years, but finally they've picked up his trace. Blake may be the best there is at tracking down people who don't want to be found, but Winterlong taught him everything he knows. If there's anyone who can find him - and kill him - it's them. It's time for Carter Blake to up his game. * High-stakes action, blistering tension and a deadly game of cat and mouse, THE TIME TO KILL is the must-read new thriller from Mason Cross: 'Terrific stuff!' Ian Rankin 'Mason Cross is a thriller writer for the future who produces the kind of fast-paced, high octane thrillers that I love to read.' Simon Kernick 'So pacy I'm exhausted! Definitely one to read if you like your thrillers thrilling.' Emma Kavanagh 'One of the most interesting 'loner' heroes to have arrived in recent years . . . Told with pace and vigour by a writer who seems to have a natural aptitude for thrillers, it is not to be missed.' Daily Mail 'My kind of book.' Lee Child * If you like Lee Child's Jack Reacher, you will LOVE the race-against-time Carter Blake series: 1. The Killing Season 2. The Samaritan 3. The Time To Kill 4. Don't Look for Me 5. Presumed Dead * Each Carter Blake thriller can be read as a standalone or in series order *

Mason Cross was born in Glasgow in 1979. He studied English at the University of Stirling and currently works in the voluntary sector. He has written a number of short stories, including 'A Living', which was shortlisted for the Quick Reads 'Get Britain Reading' Award. He lives in Glasgow with his wife and three children. Find out more at www.masoncross.net or follow him on Twitter @MasonCrossBooks

More About Mason Cross
Add To Wishlist
Buy from our bookstore and 25% of the cover price will be given to a school of your choice to buy more books.