As Witch Child ends so Sorceress begins. Alison Ellman is still searching for information about Mary Newbury; she has a diary and some scattered information about other people in Mary's life, but Mary has disappeared into the forests and Alison has no way of following her. But when she meets Agnes Herne, Alison encounters the person who is going to tell her all about Mary's life after she leaves Beulah. Agnes is a descendant of Mary's and has a special skill which allows her to be in touch with Mary in the spirit world. And Mary has a story to tell. A story of love and friendship, sadness and loss. A story that takes her across the New World in an epic search for a home. We fell under the spell of Mary in Witch Child and now at last we find out what happened to her after her ill-fated time in Beulah. Just as Mary's story has to be told to Agnes, it has to be read by us for it is passionate, compelling and utterly wonderful.

'A fine achievement, memorably describing times when teenagers had problems that make today's frustrations seem tame' Nicholas Tucker, Independent 'A gripping, thrilling novel that transports you to a time of paranoia and witch hunts. Witch Child and the sequel Sorceress are historical fiction at its very best' Waterstone's Guide to Kid's Books

Celia Rees is one of Britain's foremost writers for teenagers and her titles for Bloomsbury have enjoyed huge success. Witch Child has been adopted by educational boards up and down the country and is required reading in secondary schools in the UK, with life sales of over 180,000, and has been translated into 25 languages. Celia has a degree in history, a strong interest in which is evident in her brilliantly researched books. Sorceress, Pirates! and Sovay have all met similar critical acclaim and are loved for their strong characters and skillfully plotted adventures. Celia Rees lives in Leamington Spa, with her ... 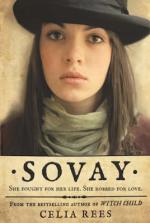 View All Books By Celia Rees