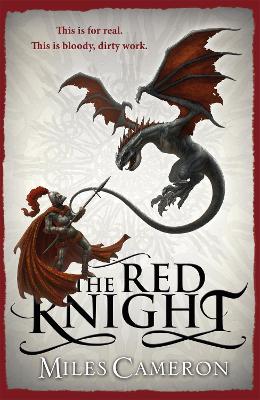 Forget George and the Dragon. Forget Sir Lancelot and tales of Knightly exploits. This is a mercenary knight as you've never seen one before. Twenty eight florins a month is a huge price to pay, for a man to stand between you and the Wild. Twenty eight florins a month is nowhere near enough when a wyvern's jaws snap shut on your helmet in the hot stink of battle, and the beast starts to rip the head from your shoulders. But if standing and fighting is hard, leading a company of men - or worse, a company of mercenaries - against the smart, deadly creatures of the Wild is even harder. It takes all the advantages of birth, training, and the luck of the devil to do it. The Red Knight has all three, he has youth on his side, and he's determined to turn a profit. So when he hires his company out to protect an Abbess and her nunnery it's just another job. The abbey is rich, the nuns are pretty and the monster preying on them is nothing he can't deal with. Only it's not just a job. It's going to be a war ... Even after a decade, readers are being hooked by THE RED KNIGHT: 'What a fantastic read. I can't remember when I've enjoyed a book so much. Loved the blend of historical with fantasy, the realism of medieval life combined with absorbing characters and a driving plot. I didn't want it to end'- Goodreads reviewer, 'The Red Knight is a must for fans of fantasy and medieval history both. Cameron's knowledge of armour and weapons and knightly accord comes from his historical fiction work as Christian Cameron and it shows.' - Goodreads reviewer, 'It's MAGNIFICENT' - Goodreads reviewer, 'This novel was fantastic . . . This was great fantasy, not grim dark, not high fantasy, just an awesome story. Read it, you'll enjoy it' - Goodreads reviewer, 'Few books have enthralled me quite the way The Red Knight did . . . This book is just the type of epic medieval-type fantasy that I crave . . . it's an exceptional book' - Goodreads reviewer, 'The best fully realized high Medieval tale since Tolkien . . . Read and enjoy' - Goodreads reviewer,

Miles Cameron is a fantasy novelist who currently lives in Toronto, Canada. He is a military veteran and has a degree in Medieval History. His debut novel (The Red Knight), first in The Traitor Son novels, was one of the most acclaimed fantasy debuts of 2012 and nominated for the David Gemmell Morningstar award. It is followed by The Fell Sword, published in 2014. He also writes highly acclaimed historical fiction under the name Christian Cameron. You can learn more at www.christiancameronauthor.com, or by following @Phokion1 on twitter.

More About Miles Cameron
Add To Wishlist
Buy from our bookstore and 25% of the cover price will be given to a school of your choice to buy more books.