Have you ever wondered how one split-second decision could change your life for ever? The Bonners are the most powerful couple in Texas. Bode Bonner is the Republican Governor and his wife, Lindsay, is always by his side. From the outside everything looks rosy. But the Bonners are not happy. Bode is bored - he longs for more excitement in his life. Lindsay is at the end of her tether. She's had enough of Bode's womanising and of playing the dutiful wife.She is desperate to break free of her bland, wealthy lifestyle. Then Lindsay makes an impulsive decision that helps save the life of a poor Hispanic boy. From that moment on, nothing will be the same for the Bonners. Everything is about to change... From the author of the international bestsellers The Colour of Law and Accused, this is an addictively readable novel, filled with dramatic and ingenious twists and turns, that delves deep into the dark heart of Texas.

Bestselling writer Mark Gimenez takes on the Grisham mantle with a politico-legal-romantic thriller that fairly whips along. . . . You can see the movie coming a mile away, and it'll be a cracker. * Melbourne Review * Here's a heady mix of drugs, sex, politics and gunfights played out in a modern Texas, a big tale that gallops along at mustang pace. . . . Mark Gimenez already has a reputation as a fine thriller writer and doesn't disappoint here. . . . VERDICT: HEADED FOR THE BESTSELLER LIST. * Courier-Mail * A gripping story, well told. * Literary Review *

Born and educated in Texas, Mark Gimenez attended law school at Notre Dame, Indiana, and practised with a large Dallas law firm. He lives in Texas. 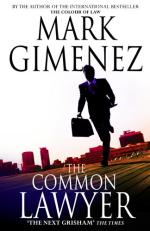