Sex, drugs, diva tantrums: if you're on the A list, you can get away with murder ... but there's still one taboo left in Hollywood. If you're an all-action movie star hero, and you're gay, then your home is in the closet. End of discussion. Matt Walsh is at the very top of the Hollywood ladder. He easily commands $20 million per film, and every one is a box office smash. But Walsh has a secret: his lover Billy West, a rent-boy with the fragility of Monroe and the body of Brad Pitt. When British hack Simon Fowler is sent out to write a grovelling vanity piece on Walsh, he unearths the star's secret life, and a story that could destroy him. Walsh has a long way to fall, and he could take a lot of people with him. STAR PEOPLE hops over the velvet rope and points its telephoto lens at a cast of stars, hookers, paparazzi and scarier-than-hell PR bitches. The result is a smart, fast-paced and wildly entertaining novel about love, fame, jealousy . . . and murder. 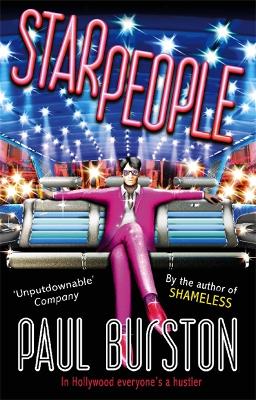 Paul Burston was born in Yorkshire, raised in Wales, and now lives in London. A journalist and broadcaster, his work has appeared in TIME OUT, SUNDAY TIMES, THE TIMES, GUARDIAN, INDEPENDENT, INDEPENDENT ON SUNDAY and on Channel 4. He lives in London. He is also a curator in residence at the South Bank.