It's the end of the Christmas holidays and Jinx is worried about her best friend Liberty Latiffe and, for the first time ever, isn't looking forward to the start of the spring term at Stagmount, England's most exclusive school for girls. It's pretty clear that her beloved school is fast becoming a den of iniquity where you could cut the sexual tension with a knife. As the school becomes a shambles, Mrs Bennett loses her cool. Where the hell is the bloody bursar when you need him? Why on earth have the identical Russian triplets been moved down into the lower sixth? Where do Liv and Charlie keep sneaking off to and what is causing their suspicious bruises? Can Jinx get her man and save the school?

Sara Lawrence attended Rodean School, which was founded by her relatives. Following her MA she became a journalist, working as a staff writer at the Times and the Daily Mail. Jinxed is the sequel to High Jinx. 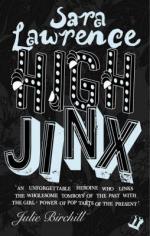 View All Books By Sara Lawrence