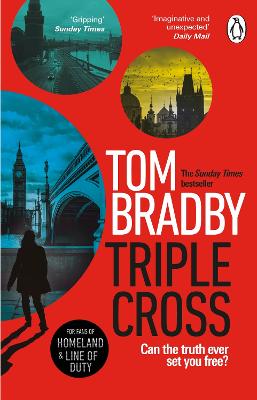 From the ITV News at Ten Anchor 'Bradby has the talent of a reporter but the heart of a storyteller' Daily Mail Attempting to rebuild her shattered life in the South of France, former MI6 operative Kate Henderson receives an unexpected and most unwelcome visit from an old adversary: the UK Prime Minister. He has an extraordinary story to tell - and he needs her help. A Russian agent has come forward with news that the PM has been the victim of the greatest misinformation play in the history of MI6. It's run out of a special KGB unit that exists for one purpose alone: to process the intelligence from 'Agent Dante', a mole right at the heart of MI6 in London. Against her better judgement, Kate is forced back into the fray in a top-secret, deeply flawed and dangerous investigation. But now she's damaged goods. Her one-time allies no longer trust her. And neither do her enemies. With the stakes this high, can the truth ever come out? Or is the cost of uncovering it a price that no one, least of all Kate, can afford to pay? With a bonus extract of Tom Bradby's next book, Yesterday's Spy, coming Spring 2022 ___________________________ Praise for the Tom Bradby: 'A gripping thriller' Sunday Times 'Enthralling and fast-moving' Daily Mail 'Teems with twists ... imaginative and unexpected' The Times 'Cracking' Financial Times 'An all-too-plausible premise' Observer

TOM BRADBY is a novelist, screenwriter and journalist. He has written nine previous novels, including top-ten bestselling Secret Service, and its two sequels, Double Agent and Triple Cross. The Master of Rain was shortlisted for the Crime Writers Association Steel Dagger for Thriller of the Year, and both The White Russian and The God of Chaos for the CWA Historical Crime Novel of the Year. He adapted his first novel, Shadow Dancer, into a film, the script for which was nominated for Screenplay of the Year in the Evening Standard Film Awards. As a broadcaster, he is best known as the current Anchor of ITV's News at Ten. In his first year in the job he was named Network Presenter of the Year by the Royal Television Society. He has been with ITN for thirty years and was successively Ireland Correspondent, Political Correspondent, Asia Correspondent (during which time he was shot and seriously injured whilst Covering a riot in Jakarta), Royal Correspondent, UK Editor and Political Editor- a job he held for a decade - before being made the Anchor of News at Ten in 2015.

More About Tom Bradby
Add To Wishlist
Buy from our bookstore and 25% of the cover price will be given to a school of your choice to buy more books.