Part of the Benson and De Vere Series

'Vivid and exciting' The Times WINNER OF THE PRIX DU MASQUE She was found hanging in a dingy London bedsit with a blood orange in her mouth. Diane Heybridge, a young woman without a past or much of a future, has captured in death the compassion denied her in life. For the prosecution, this seeming suicide is nothing more than a bungled killing and a disgusted public looks to Court 2 of the Old Bailey for justice. Her callous, jilted partner Brent Stainsby stands accused of her murder and he's turned to the maverick legal team William Benson and Tess de Vere to defend him. However, as the trial unfolds it soon becomes clear that there is far more to Diane Heybridge than meets the eye. She wasn't the weak and downtrodden victim now being presented to the jury. She was capable of a sophisticated form of vengeance. By the same token, Brent Stainsby isn't who he seems to be either. He's hiding a motive for murder unknown to the police and may well be playing a deadly game of poker with the judicial process. What began as a simple trial rapidly turns into a complex search for the truth beyond the confines of the courtroom...

Punchy dialogue and devious plotlines . . . compelling * The Times * The courtroom scenes are brilliant, and Benson really comes alive under pressure. Stubborn, fitful and contradictory, he's a highly individualised creation * Spectator * I hope John Fairfax is planning a long series involving Benson. [An] excellent legal thriller * Literary Review * A good mystery, meaty courtroom drama, the ongoing puzzle of Benson's own history and some knowledgeable assaults on the Tories' policy of justice on the cheap add up to a great read * Morning Star * Vivid and exciting, and the novel raises some important issues to do with prisons and the ethics of the legal system -- Marcel Berlins * The Times * Assured storytelling and highly intriguing moral complexity. I tore through it -- Chris Brookmyre

John Fairfax is the pen name of William Brodrick, who practised as a barrister before becoming a full-time novelist. Under his own name he is a previous winner of the Crime Writers Association Gold Dagger Award. 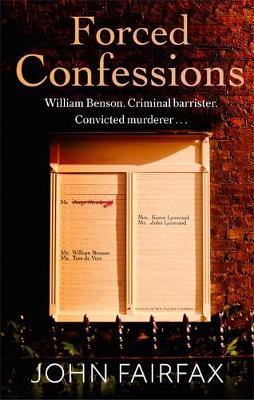