LoveReading View on The Murder Artist

Kidnapped twins, six year olds, in a frightening and extraordinarily disturbing tale, especially when you realise why they have been captured.  This is first-rate, with good twists, the tension is maintained throughout, the obsession of the parent beautifully handled and the mix of witchcraft, voodoo and magic quite fascinating.  Itâs scary stuff.

There's nothing in a glorious summer's day to suggest anything even remotely sinister. In fact, Alex Callahan, a news correspondent, surprises himself by enjoying the Renaissance Faire that his six-year-old twins, Kevin and Sean, have dragged him to.

The boys are delighted by the jugglers and magicians, jesters and foodmongers dressed in full Elizabethan costume. But it's the joust that the boys have really been waiting to see. Alex takes a break to watch, while keeping half an eye on the twins, but when he turns to see how they are enjoying themselves, but he can't see them at first. And then: he really can't see them at all.

The perfect day has turned into every parent's nightmare. There's no sign of Sean and Kevin, and eventually the police arrive. They're initially suspicious of Alex but no one can explain the bizarre origami figure he finds after he returns to his empty house. Or the bowl of water that has been left on the top shelf of the wardrobe. Or, more sinisterly, the T-shirt soaked in blood.

As police attention to the case wanes, Alex's own investigations uncover a sinister, underground world that he never dreamed existed. A world where reality is portrayed as illusion, and where the reason behind the twins' disappearance is more terrifying than anything Alex can imagineâ€¦ 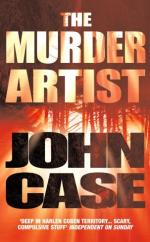 John Case is the author of the international bestseller THE GENESIS CODE and the novels of THE FIRST HORSEMAN, TRANCE STATE and THE EIGHTH DAY. He lives in Northern Virginia.