Global warming, melting ice, rising water and, ingeniously, refugees chain ships together to make a largely self-sufficient, 30-mile across floating island. Earthquakes, tsunamis, volcanoes, hurricanes and the earth is indeed doomed. Climate control is managed from outer-space and big business. We see all this through the lives of some ordinary people in one of the best and eeriest reads of its type. It’s terrific.

The Earth is confronted by a terrifying disaster of man's own making. Only one quarter into the 21st century and our planet is displaying disturbing symptoms: storms, floods, mud-slides, tornadoes and blizzards afflict the globe's surface, while heatwaves, droughts and deep-freeze are regular occurrences. Not to mention volcanoes and earthquakes. Many believe that mankind's consuming lust for economic growth is fast wrecking the world, while others insist these changes are all part of the planet's natural cycle. Whatever the truth, the most alarming factor is that the Earth is beginning to tilt on its axis...and worldwide panic is looming. As governments, experts, corporations and disruptive forces squabble to be heard, it is up to individuals to seek a solution to the most horrifying geophysical scenario we have ever faced. 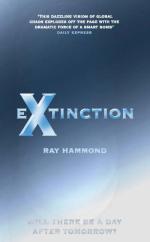 Ray Hammond is a writer, speaker and broadcaster about the future. He is the author of three novels, nine non-fiction works, children’s fiction and drama for radio and television.   He is a regular broadcaster on UK and European television and radio networks and is in demand as a corporate speaker, providing lectures on future trends for businesses, government departments and non-government organisations.