What a delight!  A well written (as one would expect from the author of The Reader), well built detective story with an eccentric 68-year old widower the reluctant investigator of computer hacking at a giant chemical factory.  Obviously he finds old secrets and a lot else in a suspenseful, highly satisfying read.  Good one.

Sixty-eight years old; a smoker of Sweet Aftons, a dedicated drinker of Aviateur cocktails, and the owner of a charismatic cat named Turbo, Gerhard Self is an unconventional private detective.
When Self is summoned by his long-time friend and rival Korten to investigate several incidents of computer-hacking at a chemicals company, he finds himself dealing with an unfamiliar kind of crime that throws up many challenges. But in his search for the hacker, Self stumbles upon something far more sinister. His investigation eventually unearths dark secrets that have been hidden for decades, and forces Self to confront his own demons.

"Here the crime novel becomes the vessel for a more raw, immediate and violent response to the demands of guilt and reparation than The Reader allows... strangely compelling."
SCOTLAND ON SUNDAY

"crammed full of ideas"
TIME OUT

"Gerhard Self is a find. He is likeable, eccentric and on the lookout for women... He is tough without any macho attitude and feels guilt when it is appropriate. He also, without any seeming angst, takes the law into his own hands. I look forward to his next appearance."
Harriet Waugh 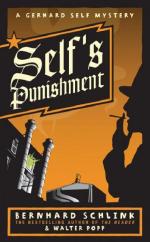