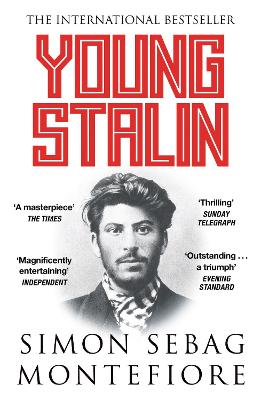 Winner of the Costa Biography Award 2007.

The background to what made the man a monster. Born in poverty, a poet, trainee priest, and fanatical revolutionary, thrilling stuff.

Winner of the Costa Biography Award What makes a Stalin? Was he a Tsarist agent or Lenin's bandit? Was he to blame for his wife's death? When did the killing start? Based on revelatory research, here is the thrilling story of how a charismatic cobbler's son became a student priest, romantic poet, prolific lover, gangster mastermind and murderous revolutionary. Culminating in the 1917 revolution, Simon Sebag Montefiore's bestselling biography radically alters our understanding of the gifted politician and fanatical Marxist who shaped the Soviet empire in his own brutal image. This is the story of how Stalin became Stalin.

Simon Sebag Montefiore is a historian and writer. His books are international bestsellers, published in 27 languages. CATHERINE THE GREAT AND POTEMKIN (originally POTEMKIN: PRINCE OF PRINCES) was shortlisted for the Samuel Johnson, Duff Cooper, and Marsh Biography Prizes. STALIN: THE COURT OF THE RED TSAR won the History Book of the Year Prize at the 2004 British Book Awards. YOUNG STALIN (published May 2007) is its companion and prequel. Born in 1965, Montefiore read History at Gonville & Caius College, Cambridge. A Fellow of the Royal Society of Literature, novelist, and television presenter, he lives in London with his wife, the novelist Santa Montefiore, and their two children. He is now writing JERUSALEM: THE BIOGRAPHY, a fresh history of the Middle East.

More About Simon Sebag Montefiore
Add To Wishlist
Buy from our bookstore and 25% of the cover price will be given to a school of your choice to buy more books.

Magna Carta The True Story Behind the Charter

The Blitzed City The Destruction of Coventry, 1940

Queen of Our Times