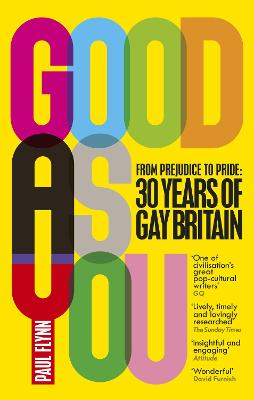 Good As You Synopsis

Long-listed for the Polari First Book Prize In 1984 the pulsing electronics and soft vocals of Smalltown Boy would become an anthem uniting gay men. A month later, an aggressive virus, HIV, would be identified and a climate of panic and fear would spread across the nation, marginalising an already ostracised community. Yet, out of this terror would come tenderness and 30 years later, the long road to gay equality would climax with the passing of same sex marriage. Paul Flynn charts this astonishing pop cultural and societal U-turn via the cultural milestones that effected change-from Manchester's self-selection as Britain's gay capital to the real-time romance of Elton John and David Furnish's eventual marriage. Including candid interviews from major protagonists, such as Kylie, Russell T Davies, Will Young, Holly Johnson and Lord Chris Smith, as well as the relative unknowns crucial to the gay community, we see how an unlikely group of bedfellows fought for equality both front of stage and in the wings. This is the story of Britain's brothers, cousins and sons. Sometimes it is the story of their fathers and husbands. It is one of public outrage and personal loss, the (not always legal) highs and the desperate lows, and the final collective victory as gay men were final recognised, as Good As You.

'One of the most important books about gay culture in recent times.' - Andy Thomas, The Quietus

'One of civilisation's great pop-cultural writers...tells the story of some of the most amazing decades in British history' - GQ Style

'Lively, timely and lovingly researched: thoroughly gay, in both the old and the new senses of the word.' - Louis Wise, The Sunday Times

'Important and insightful' - The Pool

'An essential testament that needs to be read by anyone who came of age during the last three decades: gay, straight, parent, child, sister, brother, politician, policy maker, celebrity, commentator - all of us who are trying to make sense of where we came from and where we are now' - John Tiffany

'Whether it's the bittersweet recollections of a former London Lighthouse AIDS nurse, the unexpected moral fortitude of a former tabloid editor, or the Grindr confessions of a pop idol, Flynn finds the heroism in the everyday and the exceptional...an ambitious and inspiring work' - Adam Mattera, former Attitude editor

'As fascinating as it is laugh out loud funny, and proves, quite brilliantly, that there's nowt so queer as folk' - Antony Cotton 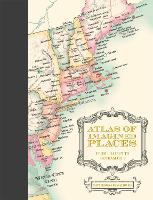 Atlas of Imagined Places from Lilliput to Gotham City