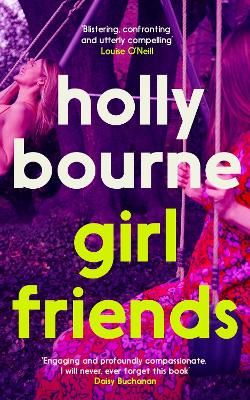 Men see women in two separate categories. There are the women they sleep with, and the women they fall in love with. And they will treat you differently based on that.

From the day they first meet as teenagers Fern and Jessica are best friends. Despite their differences, they are there for each other throughout everything, navigating the difficulties of growing up and fitting in. That is, until Jessica crosses a line that Fern can't forgive. But now, more than ten years later, Jessica has unexpectedly reappeared in Fern's life. A lot has changed for them both - but can their relationship be different now they are older? Is it possible for either of them to rewrite the role that they have been cast in? Or will their shared history ultimately be doomed to repeat itself? Set between the present day and the past,

Girl Friends is a blisteringly funny and devastating novel: both a joyful celebration of female friendship and a razor-sharp look at the damage we can all cause to those we claim to love the most.

'Girl Friends is a blistering, confronting, and utterly compelling read. It's laugh-out-loud funny and disquieting in equal measures. This is Holly Bourne at her very best' - Louise O'Neill

'I will never, ever forget this book. It explores some of the darkest and most difficult parts of womanhood and growing up in an engaging and profoundly compassionate way. It's more than a page turner - it's the sort of story you inhale. Fern is one of the most real, most loveable heroines I've met. This book will leave its readers kinder and wiser, and it will inspire us all to forgive ourselves for our complicated pasts' - Daisy Buchanan

'A total tour de force - Girl Friends is all at once shocking, validating, shrewd and sharp-witted. I didn't even know female friendship could be altered by the male gaze until I read this! And that is what is so astounding about Holly's work: she makes you understand what you didn't know you needed to examine . . . put words to my experience of growing up in the noughties and how the boys back then affect who I am now. Just magnificent. Buy it for every friend you have, and then hold a book club to discuss immediately.' - Laura Jane Williams

Holly Bourne is the author of Am I Normal Yet?, How Hard Can Love Be?, What’s a Girl Gotta Do?, The Manifesto on How to be Interesting and Soulmates. She graduated with a first class degree in Journalism Studies at University of Sheffield and spent two years working as a local news reporter on the Surrey Mirror, garnering a nomination for Print Journalist of the Year in 2010. During her time there, Holly uncovered many national and international stories that received huge press coverage. She was nominated for Print Journalist of the Year – but found she didn’t have the stomach for the job.

Her first two books, Soulmates and The Manifesto on How to be Interesting, have been critically acclaimed and translated into six languages. Am I Normal Yet? has been chosen as a World Book Night book for 2016, and shortlisted for The Bookseller YA Book Prize.

Her own experiences of blatant sexism, drove her to write Am I Normal Yet? - the first book in the critically acclaimed Normal series about three girls who start their own grassroots feminist campaign group. The trilogy has inspired young girls to start their own groups all over the UK and Holly tours schools and festivals to talk to young people about gender equality. To mark the release of What’s a Girl Gotta Do? – the last book in the trilogy – Holly launched the #IamaFeminist social media campaign which trended worldwide. She lives in Lewes.

She worked as a journalist for TheSite.org an advice and information website for 16-25 year olds, click here to read a Q&A with Holly.

More About Holly Bourne
Add To Wishlist
Buy from our bookstore and 25% of the cover price will be given to a school of your choice to buy more books.