An interesting story exploring the potential use of technology in criminal cases (but it is not for the squeamish!).  â€œPredictive Phenotypingâ€ will allow the police to know who they are looking for rather than just giving them something to match when they catch someone.  I wasnât totally convinced but I was willing to suspend judgement for the sake of a good story, and I certainly got that.  I also got some interesting philosophical questions, e.g. if we can predict future psychotic behaviour, do we have a right to imprison the â€˜potentialâ criminal?  But this is no dry debate.  This is, I believe, the first of many from a fantastic new talent.

Reuben Maitland runs the UKâs elite forensic crime squad â€“ GeneCrime. Their work is at the cutting edge of modern crime detection, using the very latest scientific knowledge to identify, arrest, prosecute and convict Britainâs worst criminals. They only work on the most high-profile of cases. They are controversial, but undeniably effective. But the hunters are about to become the hunted, and find their own techniques used in an attempt to destroy them.

When one of the team is brutally murdered, Reuben does not suspect that this is the beginning of a concerted attack on the whole of GeneCrime. The first clue comes when the police discover a warning in the victimâs own blood, written in the language of genetics. Someone is out to destroy GeneCrime, even if it means killing them one by one. Another team member is taken, horrifically tortured and sadistically murdered. Reuben is desperate to find and stop the killer. But as his own investigations gather steam, he finds his career attacked. Reuben used his own most advanced scientific discovery for a very personal reason and rivals in the police use this to remove him from command. Suddenly he is on the outside of GeneCrime, cut off from their resources and power.

Reuben, ostracized and under suspicion, knows that he must fight this battle alone. The killing has not stopped, and the one thing that is beyond question is that he is the killerâs next target.

A tense and absorbing story...As auspicious as debuts get - Observer

A terrific forensic thriller, with real flesh and blood characters and a plot that never lets up. - Peter Robinson 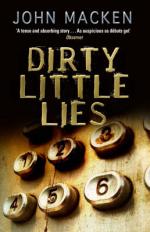 John Macken works as a research scientist in the areas of genetic and forensic science. He lives in the midlands with his family. Dirty Little Lies  is his first novel.

View All Books By John Macken