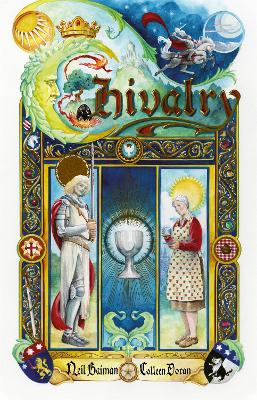 An elderly widow buys what turns out to be the Holy Grail from a second-hand shop, setting her off on an epic journey with an ancient knight who lures her with ancient relics in the hope of winning the cup.

This sumptuous, adults-only comic book adaptation brings the acclaimed writer's short story to vivid life . . . [Doran] creates imagery and visuals that'll linger in your mind's eye long after you close the book . . .Snow, Glass, Apples is a combination of a superb script, with Gaiman at his evocative, inventive best, and masterful artwork from Doran. - Starburst

A must for any fan of American Gods or the work of Neil Gaiman... [sitting] alongside the TV series and the novel as another way to tackle and understand Gaiman's deep, rich narrative - Starburst

Neil Gaiman is the acclaimed and award-winning author of the novels American Gods, Stardust, Anansi Boys, Neverwhere, Coraline, and The Graveyard Book. Winner of the Hugo, Nebula and Bram Stoker Awards, his work has been adapted for film, television, and radio, including Stardust (2007) and the BAFTA-winning and Oscar-nominated animated feature film Coraline (2009). He has written scripts for 'Doctor Who' and collaborated with Terry Pratchett, and The Sandman is already established as one of the classic graphic novels. As George R. R. Martin says, 'There's no one quite like Neil Gaiman'.

More About Neil Gaiman
Add To Wishlist
Buy from our bookstore and 25% of the cover price will be given to a school of your choice to buy more books.

The Children of Gods and Fighting Men