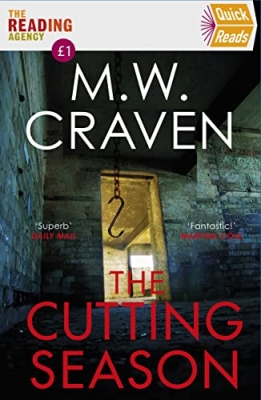 Poe's just hanging around on a Saturday afternoon...

Dangling from a hook in a meat packing plant isn't how Detective Sergeant Washington Poe wants to spend his weekend. He's been punched and kicked and threatened, and when a contract killer arrives it seems things are about to go from bad to worse. He goes by the name of the Pale Man and he and his straight-edged razor have been feared all over London for twenty years.

But Poe knows two things the Pale Man doesn't. Although it might seem like a hopeless situation, Poe has planned to be here all along. More importantly, a nerdy, computer whizz-kid called Tilly Bradshaw is watching his back. And now things are about to get interesting . . .

Although he was born in Cumbria, Mike Craven grew up in the North East before running away to join the army when he turned sixteen. After training as an armourer for two and a half years, he spent the next ten travelling the world having fun. In 1995 he left the army and completed a degree in social work, with specialisms in criminology, psychology and substance misuse. In 1999 he joined Cumbria Probation Service as a probation officer, working his way up to chief officer grade. Sixteen years later, he took the plunge and accepted redundancy to concentrate on writing. He now has entirely different motivations for trying to get inside the minds of criminals. Between leaving the army and securing his first publishing deal, Mike found time to keep a pet crocodile, breed snakes, survive cancer and get married. He lives in Carlisle with his wife, Joanne, and his springer spaniel, Bracken.