An epic yet relatable fantasy quest framed by classic tropes of steadfast loyalty and oath-swearing, and fueled by lively dialogue and gripping pace. After having been hidden away as a child and raised by a well-known soldier, Arias Côeurdrægon has come of age and it’s now time for him to take up the quest bestowed on him. Namely, he must find the Druid and gain answers to the questions that haunt him. Attended by a couple of creature companions, Arias’s journey through Aeryth is fraught with peril and sorrow, while the Druid awaits the arrival of his apprentice. The world is richly-evoked, with painterly descriptions of the natural world (the dense forests and rolling storm clouds) interlaced with vivid depictions of domestic scenes, such as the sharing of hearty stews and home-baked bread. Indeed, one of this novel’s feats is to bring together the big and the small, to interweave an overarching epic quest with intimate details of human needs, desires and daily life.

Arias Côeurdrægon has come of an age. Raised his whole life by a career soldier, perhaps the most reknown in all of Aeryth. Secreted away as a small child to the farthest reaches of the west and into a life of quiet in the forests and foothills aside the smallest of villages. Brought up as only a kingsman could, himself under an oath, and unwitting of the lad's latent talent. Arias has now been bequeathed a quest, by the one person he could not deny. A quest that will change his life forever, and put him on the path to a destiny that could alter the fate of all of Aeryth as well. Setting out with only his creature friends, a Dread Wolf pup and two long tailed furions, there are those that scheme against him, for other cause, as well as these same reasons. His Quest: find the Druid, to answer the questions welling up within him. Across the breadth of Aeryth, the Druid awaits, a man from a different age, unknowing from where or when his apprentice will arrive, but knowing it is his fate to tutor, protect and aid him. The quest itself to be filled with danger, unexpected fellowship, and heartache. For Arias is one of Mægic's Heirs The journey begins... 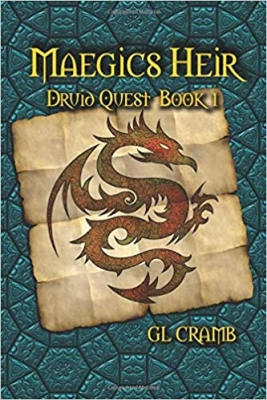