Half A World Away in Africa

LoveReading View on Half A World Away in Africa

Such a great read oh my goodness this authors first trip and to climb Kilimanjaro was certainly not for the faint hearted most of us would have packed up and gone home but not this determined author and all in the name of charity. Then years later the author and this time with his wife walking with lions, in search of Rhinos, beautiful scenery and the dreaded mountain to climb! and will they climb this? It is an interesting read, fascinating accounts of Africa (I've never been but just loved the descriptions, the wildlife and culture) I take my hat off to him not sure if I would follow in his footsteps but has given me a great read on my holiday. This author writes a good story and keeps the reader on their toes. This author has written a number of books of his adventures and I will certainly be following him and catching up on what I have been missing.

Half A World Away in Africa Synopsis

Where else but Africa, can you touch mountain snow one day and run from a lion, on another? Robbed of all his possessions, riddled with flu and wearing borrowed pink tracksuit bottoms, the Kilimanjaro climb was doomed to fail. Alistair was determined to raise money for charity and somehow made it to the crater rim before being escorted off the mountaintop. Years later, he returned to Africa, this time with his wife. They planned to relax in Zanzibar, before boarding an overland truck. Within weeks they’d walk with lions, search on foot for rhino’s, raft the Zambezi and explore the Okavango Delta. But first, there was a mountain called Kilimanjaro, waiting to be climbed again. If you’ve ever wondered what it is like to explore the Serengeti, touch the snows of Kilimanjaro, join an overland safari or visit the prison that once held Nelson Mandela, this is the book for you. 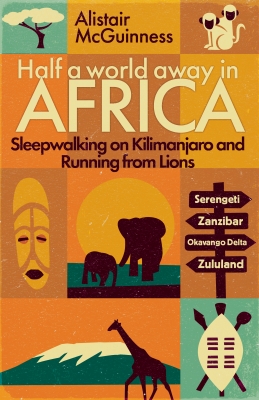 View All Books By Alistair McGuinness