Powerful, sweeping and elegantly composed, this compelling novel takes in Burma’s history from the 1940s to the 1960s and draws on the author’s personal history to remarkable effect.

When Benny settles in Ragoon, part of the British Empire, he falls for Khin, who belongs to the persecuted Karen minority group, and they go into hiding when WWII erupts. The end of the war heralds fresh dangers when the nationalists take control. Then, when the Karen people – and other ethnic groups - are refused their desire to self-govern, a brutal, long-running civil war breaks out and Benny and Khin’s firstborn child - the first ever Miss Burma beauty queen - is thrust into a world of conflict, uncertainty and contradictions. The historical details are enlightening, yet this expansive, lyrical novel also explores universal themes - identity, desire, patriotism versus self-determinism - that transcend the particulars of time and place. This is an intensely illuminating, riveting accomplishment.

Longlisted for the National Book Award for FictionAfter attending school in Calcutta, Benny settles in Rangoon, then part of the British Empire, and falls in love with Khin, a woman who is part of a long-persecuted ethnic minority group, the Karen. World War II comes to Southeast Asia, and Benny and Khin must go into hiding in the eastern part of the country during the Japanese Occupation, beginning a journey that will lead them to change the country's history. After the war, the British authorities make a deal with the Burman nationalists, led by Aung San, whose party gains control of the country. When Aung San is assassinated, his successor ignores the pleas for self-government of the Karen people and other ethnic groups, and in doing so sets off what will become the longest-running civil war in recorded history. Benny and Khin's eldest child, Louisa, has a danger-filled, tempestuous childhood and reaches prominence as Burma's first beauty queen soon before the country falls to dictatorship. As Louisa navigates her newfound fame, she is forced to reckon with her family's past, the West's ongoing covert dealings in her country and her own loyalty to the cause of the Karen people. Based on the story of the author's mother and grandparents, Miss Burma is a captivating portrait of how modern Burma came to be and of the ordinary people swept up in the struggle for self-determination and freedom.

Like many of the best books, Miss Burma feels rooted in its time and place, while also laying bare timeless questions of loyalty, infidelity, patriotism, and identity - not to mention the globally perpetuated unfair treatment of women. Elle

Miss Burma serves as a much needed recalibration of history, one that redresses the narrative imbalance by placing other ethnic, non-Burmese points of view at the center of its story... By resurrecting voices that are seldom heard on a wider stage, Craig's novel... brings one of Burma's many lost histories to vivid life. New York Times Book Review

Charmaine Craig wields powerful and vivid prose to illuminate a country and a family trapped not only by war and revolution, but also by desire and loss. Both epic and intimate, Miss Burma is a compelling and disturbing trip through Burmese history and politics. -- Viet Thanh Nguyen, Pulitzer Prize-winning author of THE SYMPATHIZER

A riveting portrayal of human resourcefulness and heroism, and of their inadequacy before the great cataclysms of history. This engrossing novel movingly affirms - in its characters, but also in the elegance and fineness of its craft - the perseverance of dignity in the face of our helplessness. -- Garth Greenwell, author of WHAT BELONGS TO YOU

Miss Burma is a book which resonates with meaning, of how we are all actors in our histories and the histories of our nations, it disrupts our settled sense that the past is the past, and shows how it reaches forward to touch the future. It is a powerful, moving and important novel. -- Aminatta Forna, author of THE HIRED MAN

Rich and layered, a complex weaving of national and personal trauma . . . Craig has written a captivating second novel that skillfully moves from moments of quiet intimacy and introspection to passages portraying the swift evolution of political events as multiple groups and nations vie for control of Burma's future. Mesmerizing and haunting. Kirkus Reviews

Spanning generations and multiple dictators, Craig's epic novel provides a rich, complex account of Burma and its place within the larger geopolitical theater . . . The language and the images unfold with grace, horror, and intimacy. Publishers Weekly 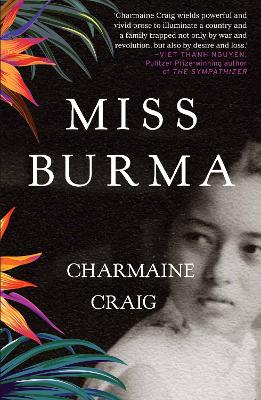 Charmaine Craig is a faculty member in the Department of Creative Writing at UC Riverside, and the descendant of significant figures in Burma's modern history. A former actor in film and television, she studied literature at Harvard University and received her MFA from the University of California, Irvine. Her first novel, The Good Men, was a national bestseller translated into six languages.

View All Books By Charmaine Craig