February 2018 Debut of the Month

In a nutshell: sci-fi and fantasy blend in high-action, thought-provoking adventure

Musician and entertainer will.i.am has collaborated with science of the future specialist Brian David Johnson to create an epic adventure. WaR seamlessly combines fantasy favourites wizards with robots, long beloved in sci-fi but now accepted as a crucial part of all our futures. Flipping back and forth in time, it stars feisty teenager Sara, whose mother is creating the first fully intelligent robot. This puts Sara at the centre of a power struggle, spanning centuries, between wizards and robots. As the story unfolds however, Sara must reconcile the two factions to defeat a common enemy. In this she’s helped by a young wizard called Geller and a robot, Kaku. Intriguing, refreshing and packed full of ideas, the momentum of the story sweeps readers along to its dramatic conclusion (at the CERN institute!). Real science is scattered throughout, and sci-fi has never seemed so now.  ~ Andrea Reece

An explosive action-adventure novel created by will.i.am and renowned futurist Brian David Johnson. Wizards are real, robots from the future are here, and the fate of our world rests in the hands of one unsuspecting teenager.When a young man breaks into her home claiming her life is in danger, Ada Luring's world changes forever. Geller is a wizard, on the run from his father's hidden clan who want to kill Ada and her mother. Sara Luring is the scientist who will create the first robot, the wizards' age-old foes. But a robot has travelled back in time to find Ada, and will lay everything on the line to protect her, as she may just be the key to preventing the earth's destruction in the future. Ada, Geller and the robots must learn to work together to change the past and secure the future. But they don't have much time before a mysterious enemy launches its attack on Earth... 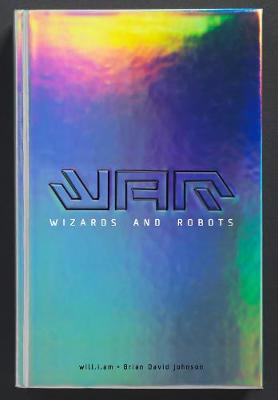 will.i.am is a multi-faceted entertainer and creative innovator, and a seven-time Grammy Award winner. Known for his work with The Black Eyed Peas, who have sold 31 million albums and 58 million singles worldwide, he is also an enthusiastic user of technologies. In recognition of his ability to harness technology to enhance entertainment, creativity and communication, Intel Corporation appointed will as Director of Creative Innovation in 2011. With a commitment to inspire kids to stay in school and go to college to become the leaders of tomorrow, will.i.am advocates the importance and power of a good education through his ...