The ghost of a poor Afghan returns to haunt the doctor who once amputated his hand. A mysterious and malignant force inhabits a room in an ancestral home and attacks all who sleep in it. A man who desecrates an Indian temple is transformed into a ravening beast. A castle in the Tyrol is the setting for an aristocratic murderer’s apparent resurrection.

Nick Rennison, editor of The Rivals of Sherlock Holmes and The Rivals of Dracula, has chosen fifteen tales from that era to raise the hair and chill the spines of modern readers.

What a fantastically fascinating anthology, and perfectly framed by Nick Rennison’s insightful introduction. For the uninitiated, the eponymous ‘Supernatural Sherlock’ refers to the proliferation of occult detective stories that burst forth between 1890 and 1930. Among the authors of this wildly inventive, flamboyantly colourful genre were the likes of Kipling and Conan Doyle himself, along with prominent occult magician Dion Fortune, and stories by each of these are featured here, along with an excellent tale by HP Lovecraft, and other lesser known writers.

These supernaturally-charged treats will amuse, astound and send shivers of unadulterated terror down readers’ spines as the intrepid detective protagonists venture where no normal detective would dare tread: into the depths of the dark unknown, investigating everything from ancestral homes occupied by evil forces, to haunted surgeons, risking their very sanity as they pursue a myriad of decidedly elusive otherworldly truths. Aficionados of detective fiction, this is a veritably original trove to explore. Joanne Owen

In the stories in this collection compiled by Nick Rennison, horrors from beyond the grave and other dimensions visit the everyday world and demand to be investigated. The Sherlocks of the supernatural - from William Hope Hodgson’s 'Thomas Carnacki, the Ghost Finder', to Alice and Claude Askew’s 'Aylmer Vance' - are those courageous souls who risk their lives and their sanity to pursue the truth about ghosts, ghouls and things that go bump in the night.

The period between 1890 and 1930 was a Golden Age for the occult detective. Famous authors like Kipling and Conan Doyle wrote stories about them, as did less familiar writers such as the occultist and magician Dion Fortune and Henry S Whitehead, a friend of HP Lovecraft and fellow-contributor to the pulp magazines of the period.

'[An] intriguing anthology' - Mail on Sunday

'A book which will delight fans of crime fiction' - Verbal Magazine

'It's good to see that Mr Rennison has also selected some rarer pieces — and rarer detectives, such as November Joe, Sebastian Zambra, Cecil Thorold and Lois Cayley' - Roger Johnson, The District Messenger (Newsletter of the Sherlock Holmes Society of London) 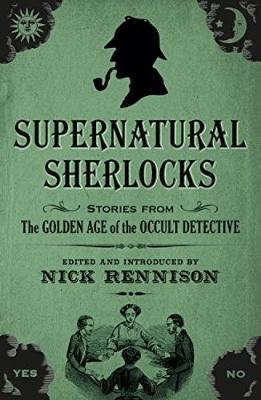