A Hero in France

LoveReading View on A Hero in France

Still set against Furst's familiar background of the dark years of WW2, this new offering full of treachery and intrigue for once eschews the tropes of espionage and restricts itself to a sober chronicle of the early years of the German occupation of Paris. It's 1941 and a man known as Mathieu works for the fledgling resistance and is instrumental in assisting downed British airmen to flee the clutches of the Nazis and return to England to continue the war effort. His helpers include shopkeepers, nightclub owners, lovers, students and barmen working in the shadows and dodging retribution with every perilous step. Furst, as ever, meticulously brings the grey years of the shadow war to life and his attention to details is worthy of the best of historical writing. Everyday heroism and patriotism is evoked with delegant and spare prose and the sum of the pieces feels altogether more epic than the individual incidents: the true mark of a writer in full control of his craft.

A Hero in France Synopsis

Spring, 1941. Britain is losing the war. Paris is occupied by the Nazis, dark and silent at night. But when the clouds part, and moonlight floods the city, a Resistance leader called Mathieu steps out to begin his work. The fighters of the French Resistance are determined not to give up. These courageous men and women - young and old, aristocrats and nightclub owners, teachers and students - help downed British airmen reach the border with Spain. In farmhouses and rural churches, in secret hotels, and on the streets, they risk everything to open Europe's sealed doors and lead Allied fighters to freedom. But as the military police heightens surveillance, Mathieu and his team face a new threat, dispatched from the Reich to destroy them all. 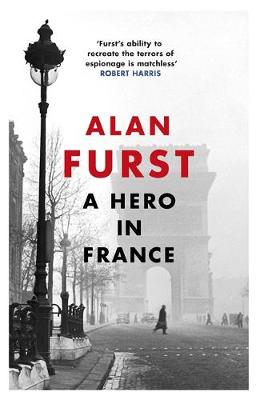 Alan Furst is widely recognised as the master of the historical spy novel. Now translated into eighteen languages, he is the author of fourteen novels including MIDNIGHT IN EUROPE, SPIES OF THE BALKANS - a TV Book Club choice - THE SPIES OF WARSAW, which became a BBC mini-series starring David Tennant and THE FOREIGN CORRESPONDENT. Born in New York, he lived for many years in Paris, and now lives on Long Island. Below is a Q & A with this author. Who's your favourite author?I've got a lot of favourites, but my favourite favourite is Anthony Powell – ...

View All Books By Alan Furst