US author Ball is slowly building an intriguing body of work that stands head and shoulders apart from much of what his contemporaries in the noir field are doing, having completed with this volume an intricate trilogy in which an unnamed city is the main character. Explored in The Vaults and Scorch City, his plots flirt with SF, comic strip tropes and unveil what could be the even darker side of a Gotham City in which greed, power, corruption and money dictate the agenda and unerringly pump blood and fear through the veins of the city's streets. The struggles of an investigative journalist to understand his shifting environment anchor the tale with echoes of Kafka, Philip K. Dick, Orwell and Hammett. It's the 60s but not as we've known it. Hypnotic and gripping stuff well worth the full immersion effort required. ~ Maxim Jakubowski

The year is 1965, and the City is a hulking shell of itself. Bohemians, crooks, and snarling anti-Communists have their run of the place, but if Nathan Canada has his way, all this decline and decadence will soon be nothing but a distant memory. His New City Project will paper over the grit and the grime, making the City safe for the rich. For Canada and his influential allies, the Project is the City's last best hope-but according to everyone else in town, it's a death knell. So when the Project's cache of explosives goes missing, everyone is a suspect, and police detective Torsten Grip finds himself up against a ticking clock and a wall of silence. Meanwhile journalist Frank Frings, the last honest man in the City, sets out to find his friend's grandson, who has gotten himself involved with Kollectiv 61, a radical group that Grip believes holds the key to the investigation. A cinematic journey through a city down on its luck and a gripping story all the way up to its shocking conclusion, Invisible Streets will leave you awed and breathless.

'Skilfully plotted and intricately woven, Invisible Streets is one of the most original novels I've read this year.'
David Bell, author of The Forgotten Girl

'Ball portrays the realities of graft and moral compromise in government perfectly ... Builds to a stunning conclusion.'
Publishers Weekly

'A treat for fans of noir and science fiction-and pretty much anyone in between.'
Booklist 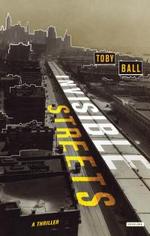 Toby Ball lives in Durham, NH with his wife and two children. He works at the Crimes Against Children Research Center and the Family Research Laboratory at the University of New Hampshire.   Author photo © @TobyBall.com

View All Books By Toby Ball