The Simpsons and Their Mathematical Secrets

The Simpsons and Their Mathematical Secrets Synopsis

You may have watched hundreds of episodes of The Simpsons (and its sister show Futurama) without ever realising that they contain enough maths to form an entire university course. In The Simpsons and Their Mathematical Secrets, Simon Singh explains how the brilliant writers, some of the mathematicians, have smuggled in mathematical jokes throughout the cartoon's twenty-five year history, exploring everything from to Mersenne primes, from Euler's equation to the unsolved riddle of P vs. NP, from perfect numbers to narcissistic numbers, and much more. With wit, clarity and a true fan's zeal, Singh analyses such memorable episodes as 'Bart the Genius' and 'Homer ' to offer an entirely new insight into the most successful show in television history.

The Simpsons and Their Mathematical Secrets Press Reviews

-David X Cohen, writer for The Simpsons and Futurama

'An entertaining picture of the insanely high-minded nature of the Simpsons writers..'

'Singh shows a knack for gliding seamlessly between abstract mathematical concepts and every day life, always seeking out the most engaging, human and topical examples. Singh's clean prose, detailed research and enthusiasm for the world of numbers are likely to captivate even those for whom maths normally creates feelings of anxiety rather than mirth'

'A valuable, entertaining book that, above all, celebrates a supremely funny, sophisticated show'

'What have Homer and Bart got to do with Euler's equation, the googolplex or the topology of doughnuts? ... Simon Singh has fun weaving great mathematics stories around our favourite TV characters New Scientist Singh shows just how addictive maths can be.'

Simon Singh received his Ph.D. in physics from Cambridge University. A former BBC producer, he directed and co-produced an award-winning documentary film on Fermat's Last Theorem that aired on PBS's Nova series and formed the basis of his bestselling book, Fermat's Enigma. He lives in London. 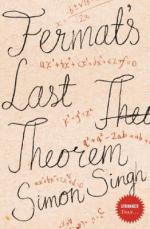 View All Books By Simon Singh