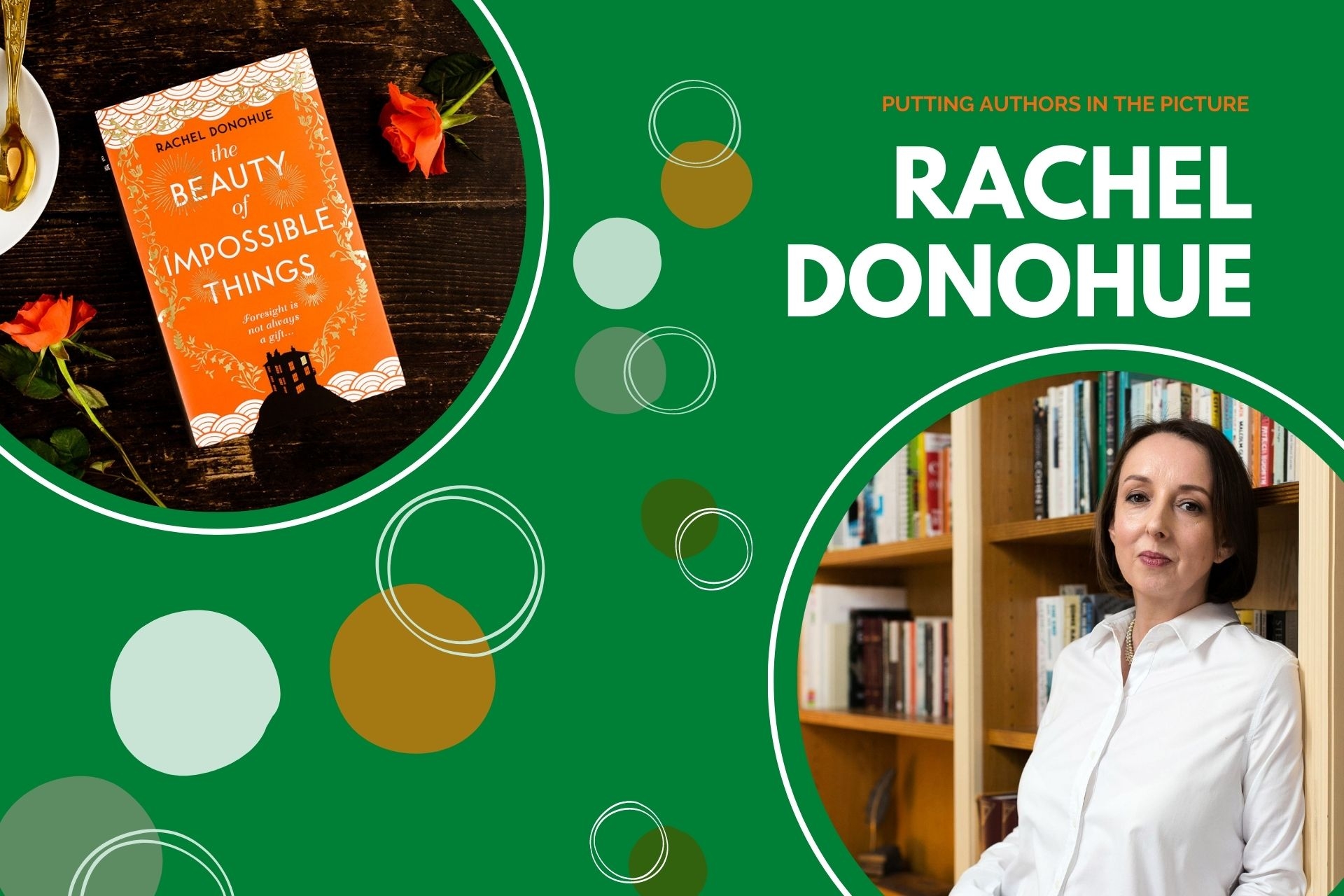 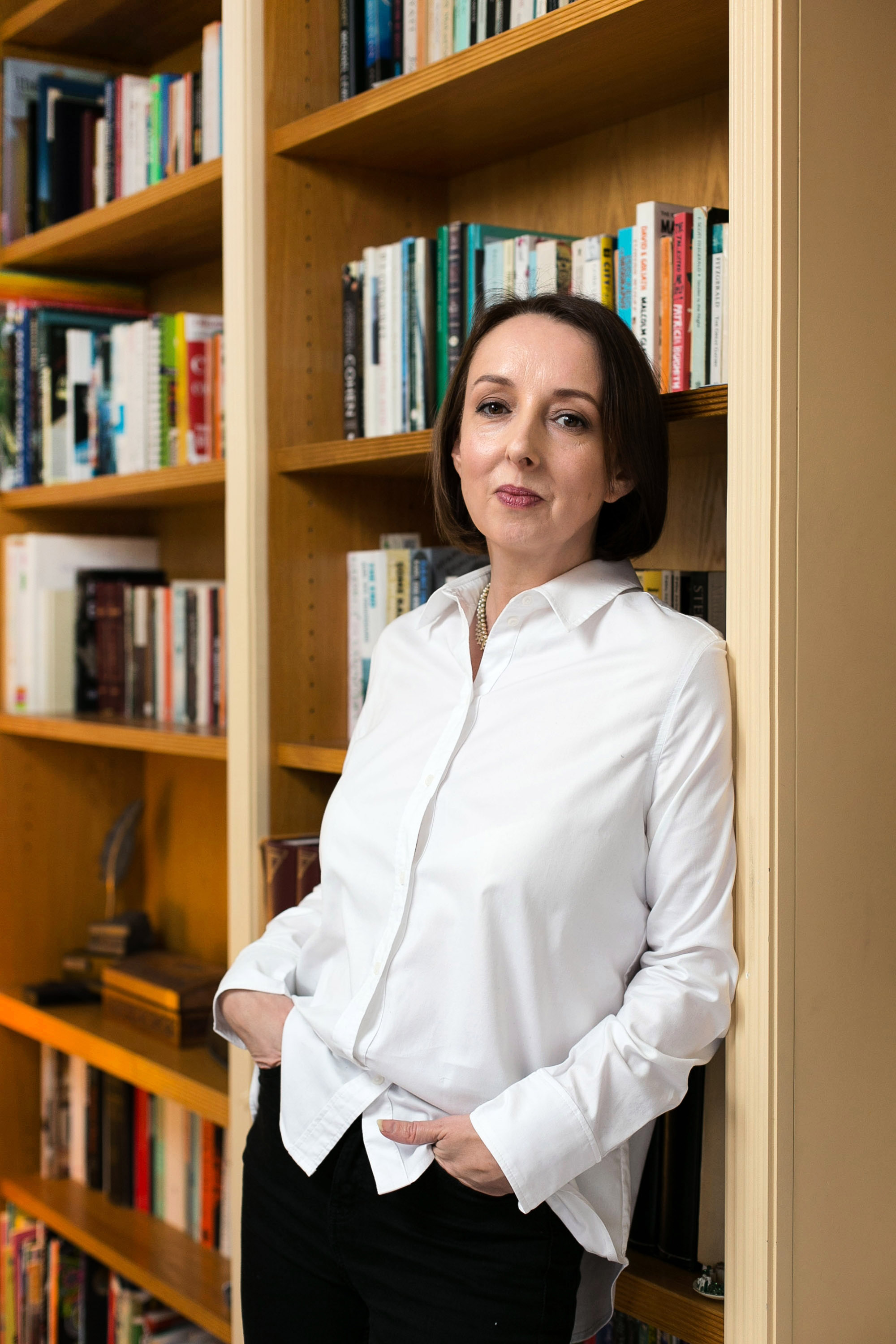 We are delighted to welcome Rachel Donohue as our Author in the Picture for May, we have reviewed both of her novels, and declare them as wonderfully eloquent, rich, and thought-provoking. Rachel lives in Dublin where she works in communications, she won the Hennessy New Irish Writer of the Year Award in 2017 for short fiction. The Temple House Vanishing was her first novel, which was an Irish Times bestseller and nominated for a best newcomer award at the Irish Book Awards and for the Kate O’Brien Award for first fiction. Her latest novel The Beauty of Impossible Things was published in May it’s rich, close, and heavy with feeling, opening thoughts and setting them free. I totally agree with Rachel about the cover of her latest book, and think the Honeymoon Revenge is fabulous!

The book that made you first want to become an author: 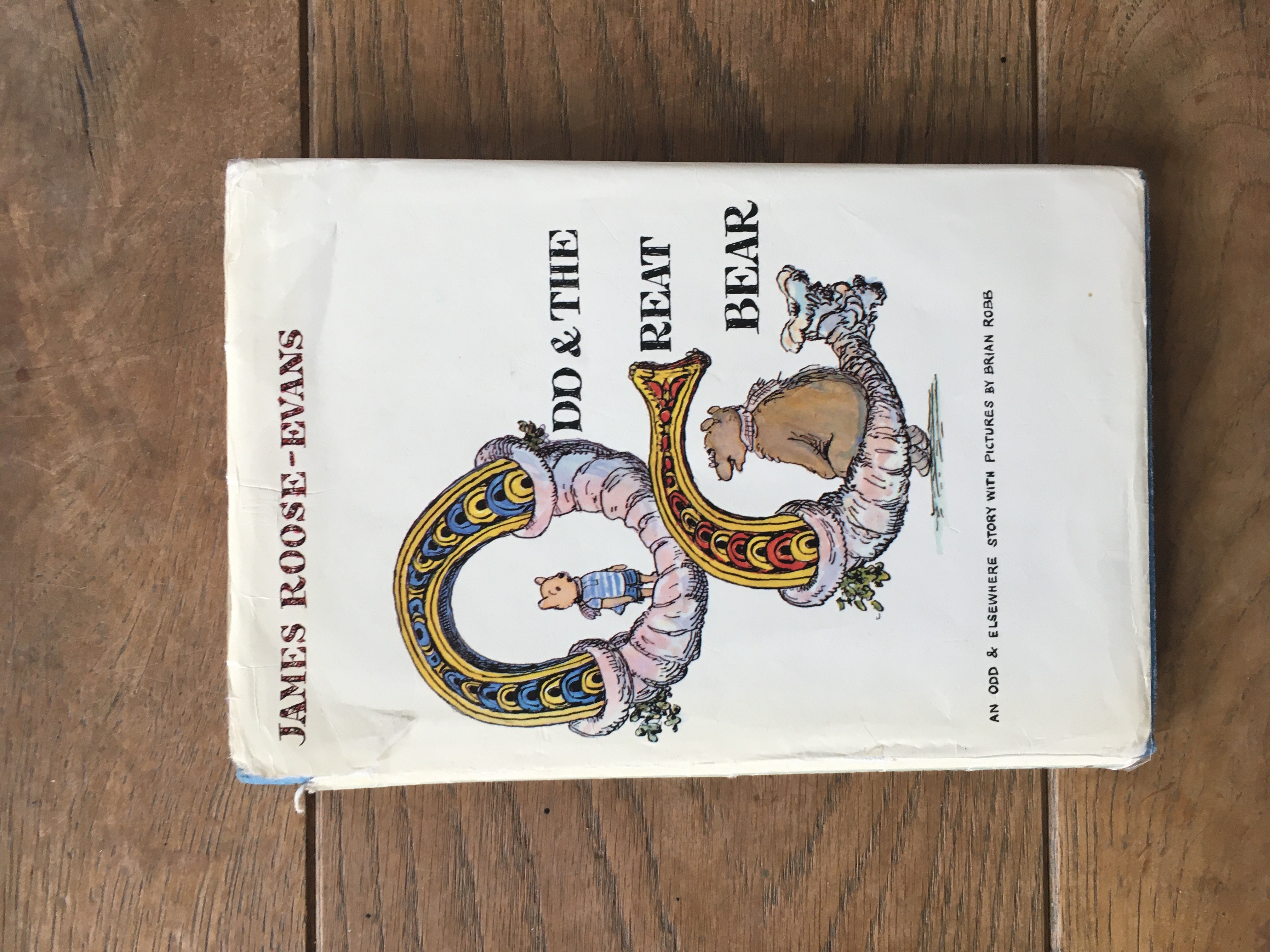 Odd and the Great Bear by James Roose Evans. I was given it as a birthday present when I was about eight. It was a hardback book which I had never owned before, and it had this great first line: “There are up days and down days”.

The story centres on a small bear called Odd who lives in London and decides to go on a journey to find out who he is because he doesn’t know any other bears. He ends up in Wales looking for the great bear of King Arthur’s legend and spends most of the story in a great deal of peril.  I remember carrying it around with me everywhere, it felt important and substantial somehow.

I was always a reader but this story triggered my first real, deep empathy for a character. I worried about Odd and wanted things to work out for him. He seemed completely real to me and his search mattered. I think storytelling itself came alive for me after reading this book. 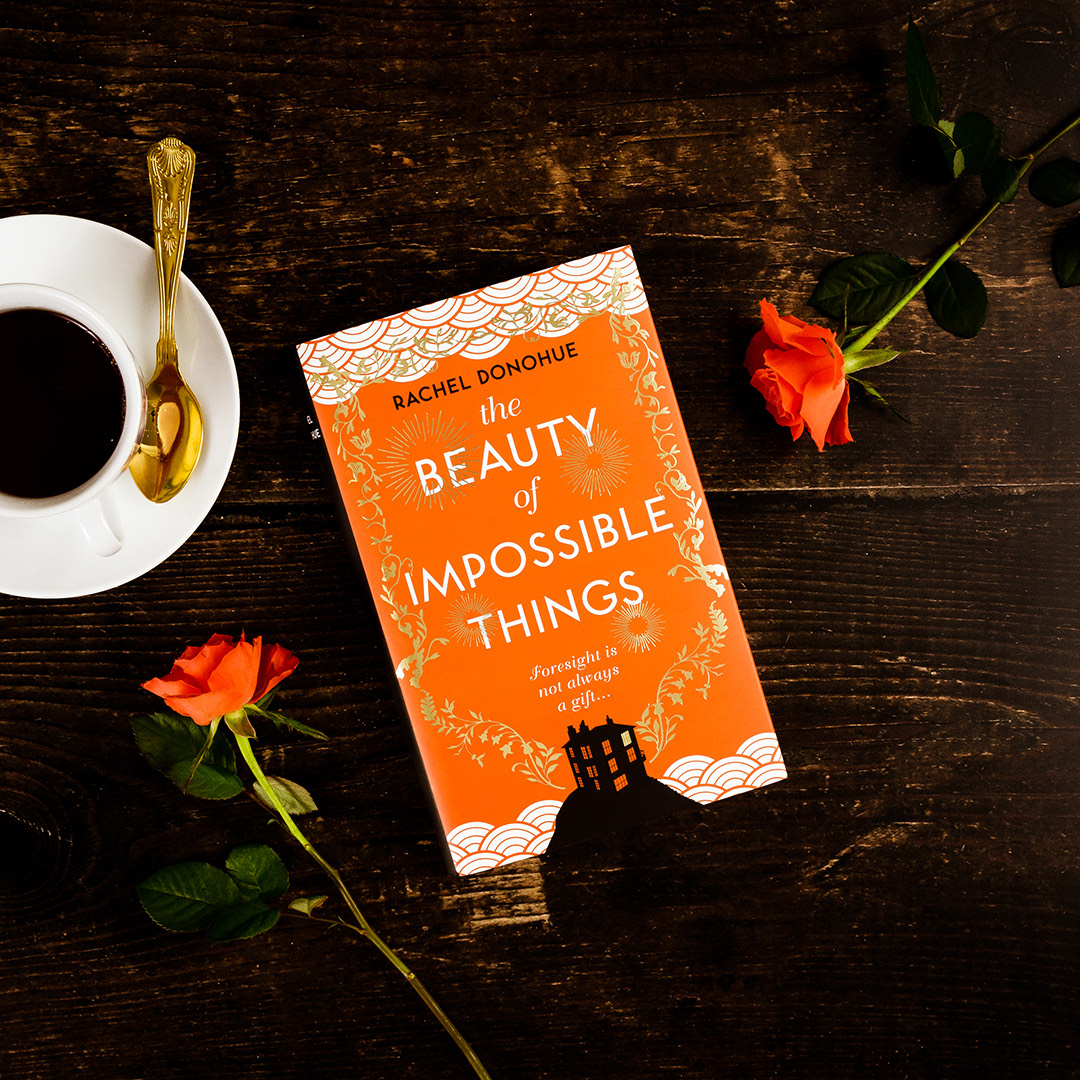 I think the cover of The Beauty of Impossible Things is quite perfect. The book centres on Natasha who lives with her artist mother in a decrepit old house overlooking the sea. One night at the start of a long, hot summer Natasha will see strange lights in the sky over the town, lights that she believes signify doom and destruction. I think the cover really captures the mystical and dreamy sense of the story. It’s also hard to beat gold foil!

I’ve been very lucky though as I loved the cover of The Temple House Vanishing too. I think as an author you need to just step back and be guided by the experts. I’ve worked with a super team in Corvus books so trust their vision completely. 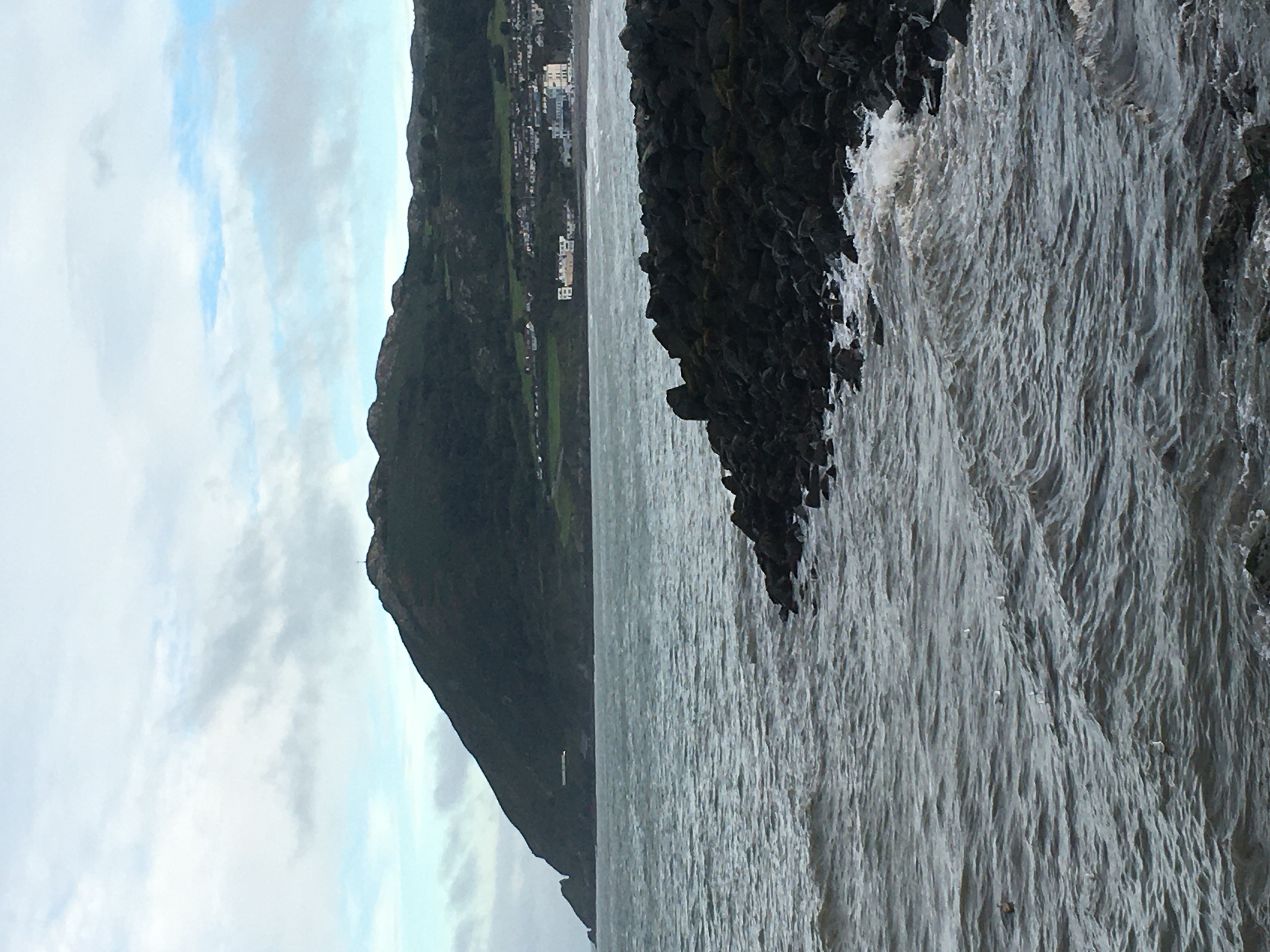 This is Bray Head in Co Wicklow, just south of Dublin. It’s a large hill that towers over the seaside town and promenade. I walk on the seafront there often and the landscape has been threaded into both my books, but particularly The Beauty of Impossible Things which is based in a similar town one strange, hot summer. I always think the light on the Head itself sort of defines the mood of the place- it can be shrouded in mist one hour and alight with the glow of gorse bushes the next.

I love the atmosphere of seaside towns generally. I grew up near Dun Laoghaire a few miles away so have always been part of a seaside community to some extent. They are a strange mix of joy and desolation depending on the weather and the season. There is something unpredictable about them.  And of course the sea is ever present, both an invitation to renewal and escape, but at times a threat.

Your most memorable book event:

I’ve only really had one book event. This is a photo of my parents and I at the book launch in Dubray books in Dublin for The Temple House Vanishing at the end of February 2020. It is probably one of the last times I got to hug them before we all headed into lockdown.

Thankfully they are safe and well a year on and I am so very grateful for that and also that we did get to be together on that particular night last year. I know they were nervous for me but incredibly proud too and this picture captures that vulnerability.

The bookshelf you return to again and again: 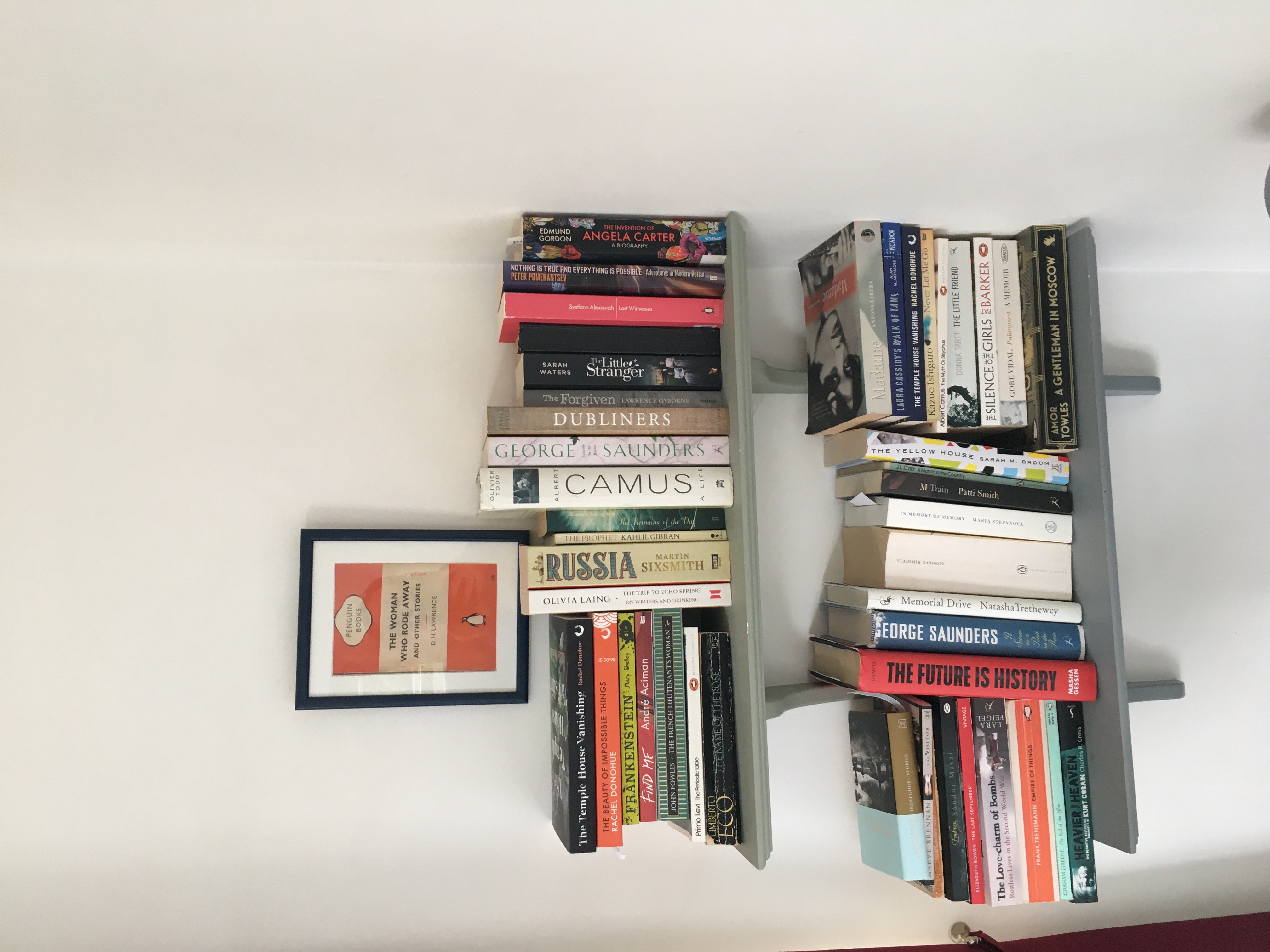 This is the bookshelf by my bed. The books on it are always the most accurate reflection of where my mind is at reading wise so it is quite fluid, along with a few favourites. At the moment Russia is featuring strongly. I go back to Nabokov and Chekov’s short stories at least once a year. I recently read George Saunders new book A Swim in a Pond in the Rain where he analyses a number of Russian short stories, it was wonderful, like a kind of masterclass.

I’m also enamoured with what I term the “dreamy”  or poetic memoir.  When I’m writing I find it hard to read fiction,  I just can’t have anyone else’s voice in my head so memoirs offer me a halfway house of literary writing with more biographical detail.  Continuing the Russian theme I am currently reading Maria Stepanova’s book about her family Memory is Memory which is stunning and the America poet’s Natasha Trethewey’s memoir about her mother, Memorial Drive which was both tragic and beautiful. And old favourite is Gore Vidal’s Palimpsest.

Some fiction eternals are there like Ishiguru, Donna Tartt and Sarah Waters. Joyce’s Dubliners is there, mainly for one story - The Dead. And a wonderful book Madame by Antoni Libera, this book was a big influence on The Temple House Vanishing.

The photo that best sums up your author journey: 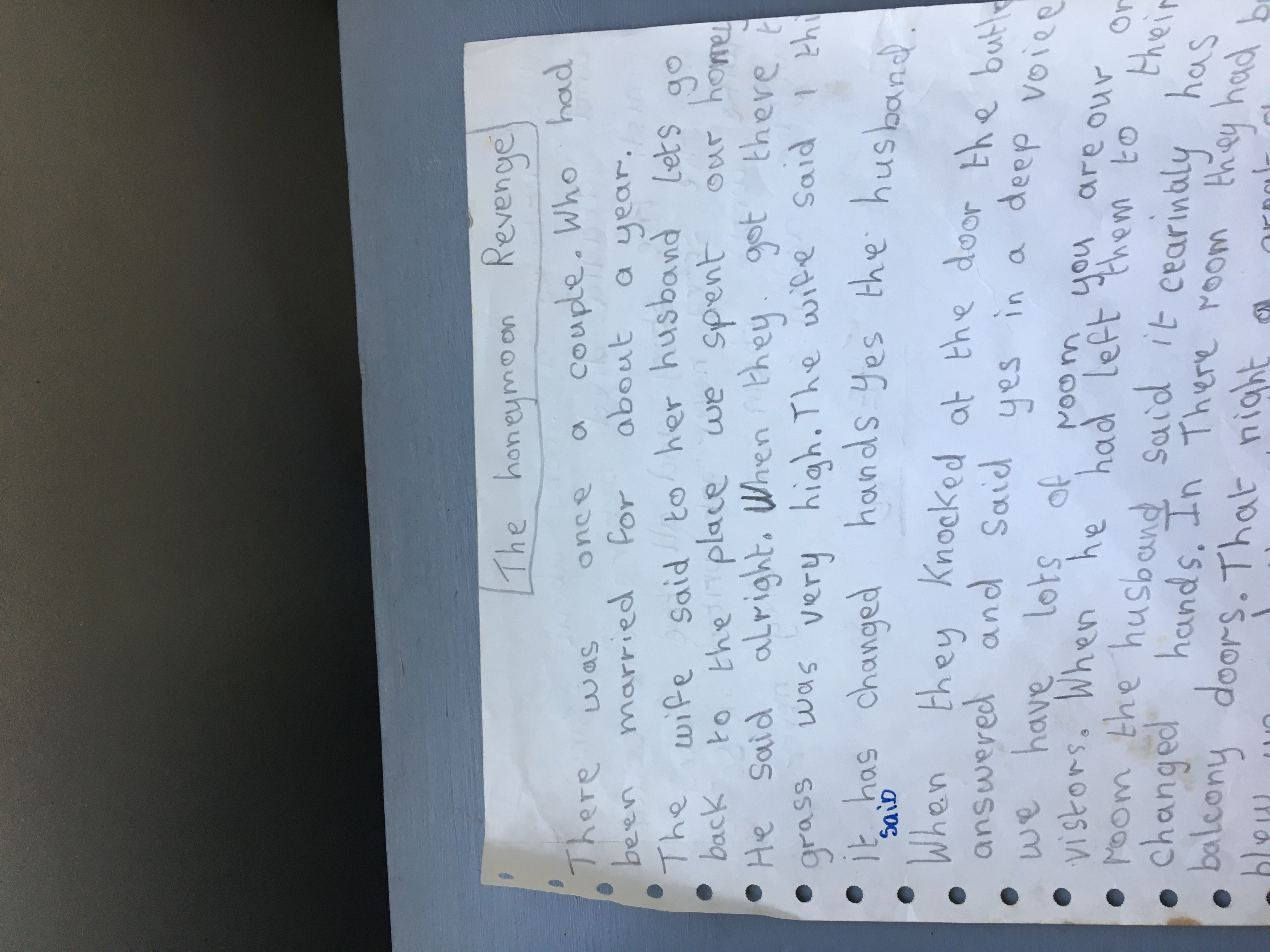 This is an early work recently found in a box during an attic clear out. I am actually not a hoarder of things so I was surprised and very glad to find I had kept them. They were written when I was about eight or nine and most are signed “a novel”, and helpfully include my age. They were obviously still important to twenty something me who must have dragged the box between rental flats and house moves.

They are heavily influenced by Enid Blyton, with a touch of Scooby Doo.  This story “The Honeymoon Revenge” had quite a good ending actually – guests in a hotel realise they are being haunted by the characters in an unfinished story.

If you enjoyed this, check out more titles by Rachel Donohue. You can also visit the Author Talk section of our blog to find more Author Q&As and 'Putting Authors in the Picture' features.