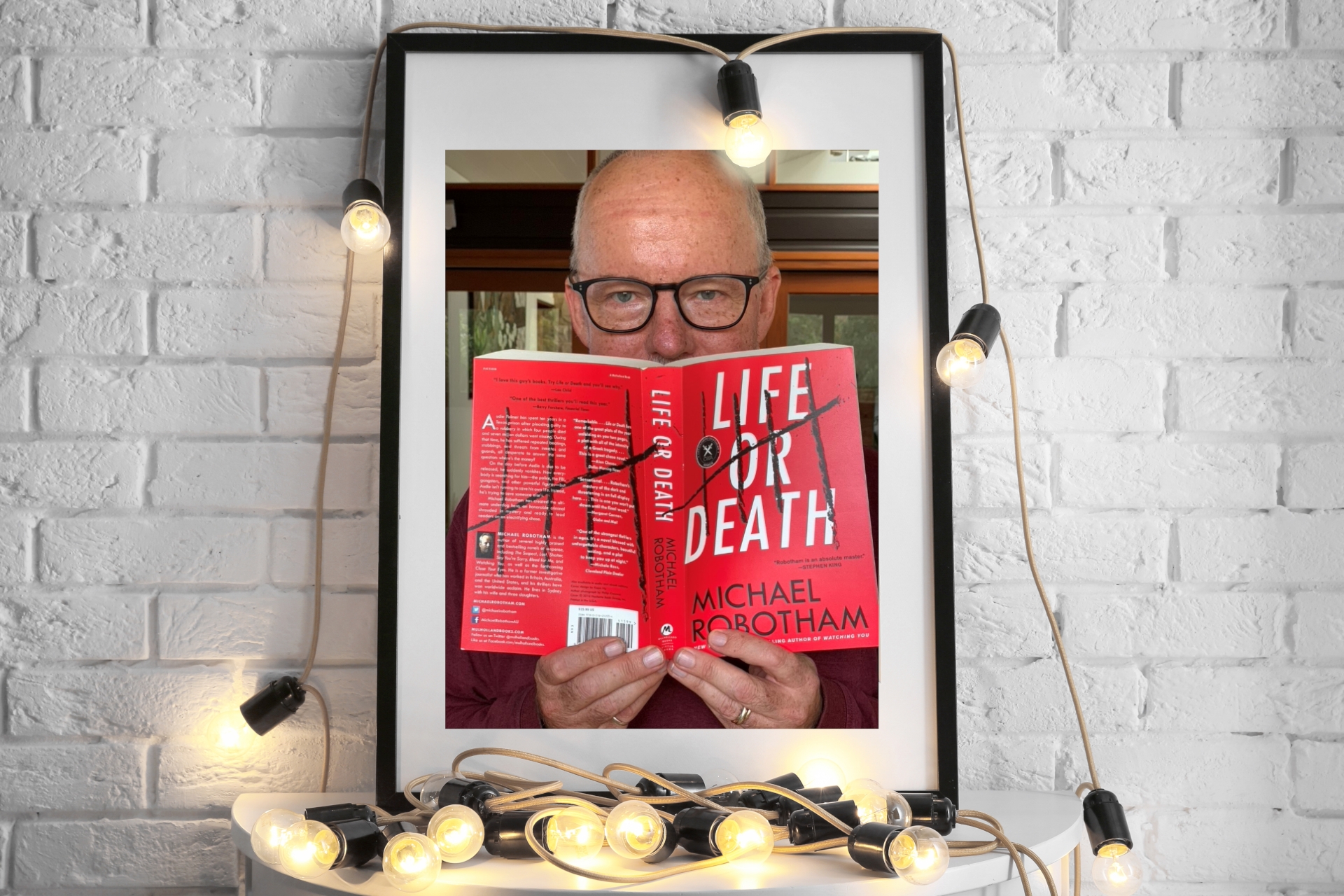 When Stephen King calls an author “an absolute master” you sit up and listen, in this case I also nodded along in agreement. Michael Robotham is not only an absolute master, he is also our author in the picture for August and shares with us some wonderful photos and anecdotes. Feelings galore hit while looking at Michael’s photos and captions, the first brought tears to my eyes (how very lovely!), I admit to being rather envious at his favourite reading spot, and the author journey photo made me smile. While Michael’s most beloved and well-read book is also one of mine, my copy isn’t quite so well-thumbed, as an avid reader myself Michael, I salute you!

Before becoming a novelist, Michael Robotham was an investigative journalist working across America, Australia and Britain. As a journalist and writer, he investigated notorious cases such as the serial killer couple Fred and Rosemary West. He has worked with clinical and forensic psychologists as they helped police investigate complex, psychologically driven crimes. His debut in 2004 was a best-seller and began the Joseph O’Loughlin series. He has also written four standalone thrillers, one of which, Life or Death, won the Crime Writers’ Association Gold Dagger Award in 2015, while The Secrets She Keeps has been adapted for television. He lives in Sydney.

The Cyrus Haven Series started in hardback in 2019 with Good Girl, Bad Girl. A LoveReading Star Book, the paperback is now one of our Books of the Month for August. It really is a fantastic beginning to what promises to be an equally fabulous series. It is one of those reads where before you know it, you are totally hooked. The second in the series When She Was Good, has just been published in hardback (28 July), and I’ve chosen it as one of my Liz Robinson Picks of the Month for August. In other words, if you haven’t yet read them, you can introduce yourself to this wonderful new series and have a reading feast during August! 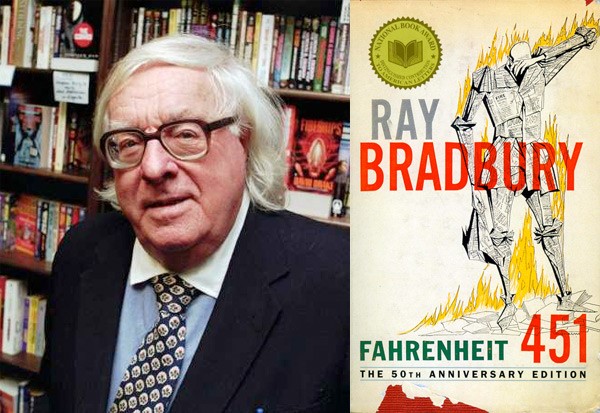 I wanted to be a writer from about the age of eleven when I discovered the books of the late great Ray Bradbury, author of Fahrenheit 451 and many brilliant collections of short stories. I wrote to Bradbury when I was still in primary school and he wrote back to me, sending me four books that weren’t available in Australia.

Years later I recounted this story for a US magazine, quoting Ray Bradbury, who once said: ‘Jules Verne was my father. Mary Shelley was my mother Edgar Allan Poe was the bat-winged cousin we kept locked in the attic.’ I wrote that Ray Bradbury was my literary father and Steinbeck and Hemingway were my over-achieving older brothers.

About a week after the story was posted on the website, I had an email from Ray Bradbury’s youngest daughter Alexandra. She told me that her father was now in his nineties, still living in Los Angeles and almost totally blind.

‘I read him your story and it made him cry,’ she told me. ‘Dad wanted you to know that you are his son.’

I have never been prouder to be a writer. 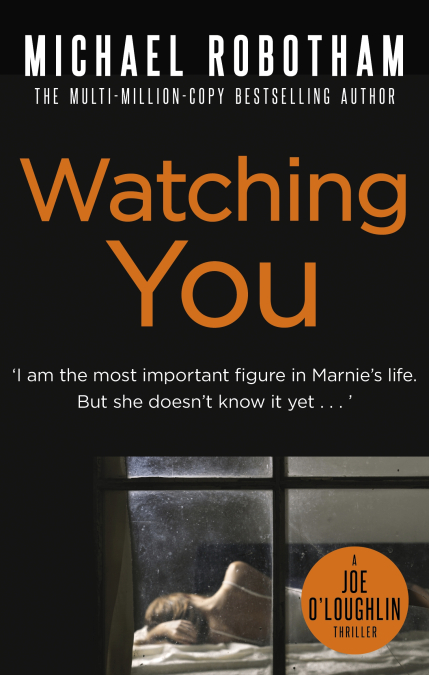 I’ve had some stunning covers put on my novels, particularly by my European publishers, who tend to think outside the box. But the cover I’ve chosen is for the paperback of Watching You, which is both elegant, haunting, beautiful and intriguing – the perfect ingredients for a psychological thriller. 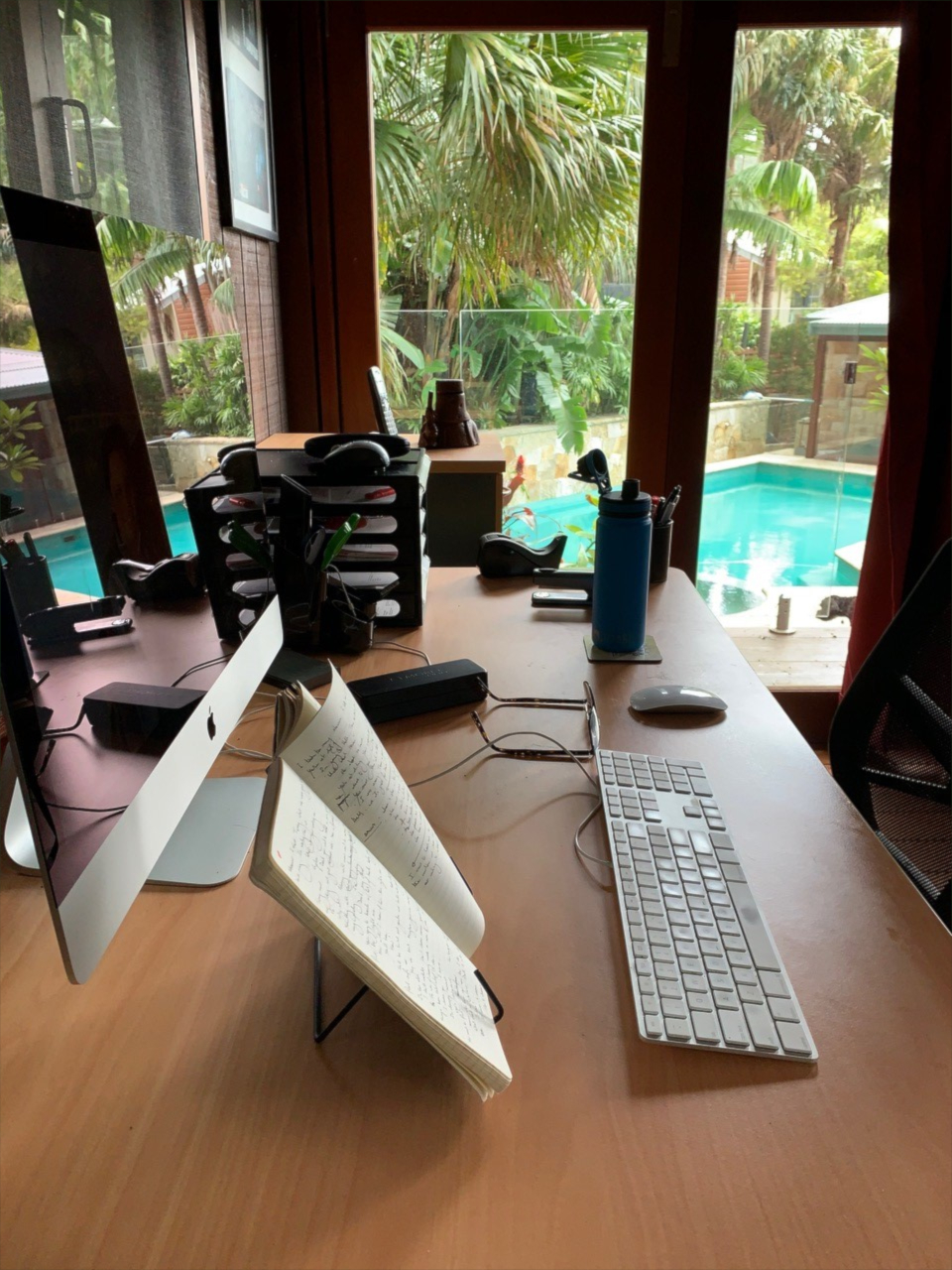 My first home office was in the basement and my three daughters gave it the nickname ‘Dad’s Pit of Despair’ because of my dark subject matter and darker moods. When we moved to our current house I had to find a new place to write and this became known as ‘The Cabana of Cruelty’. It is a truly beautiful office, but it can be difficult to conjure up the mean streets when the sun is shining and the pool beckons. 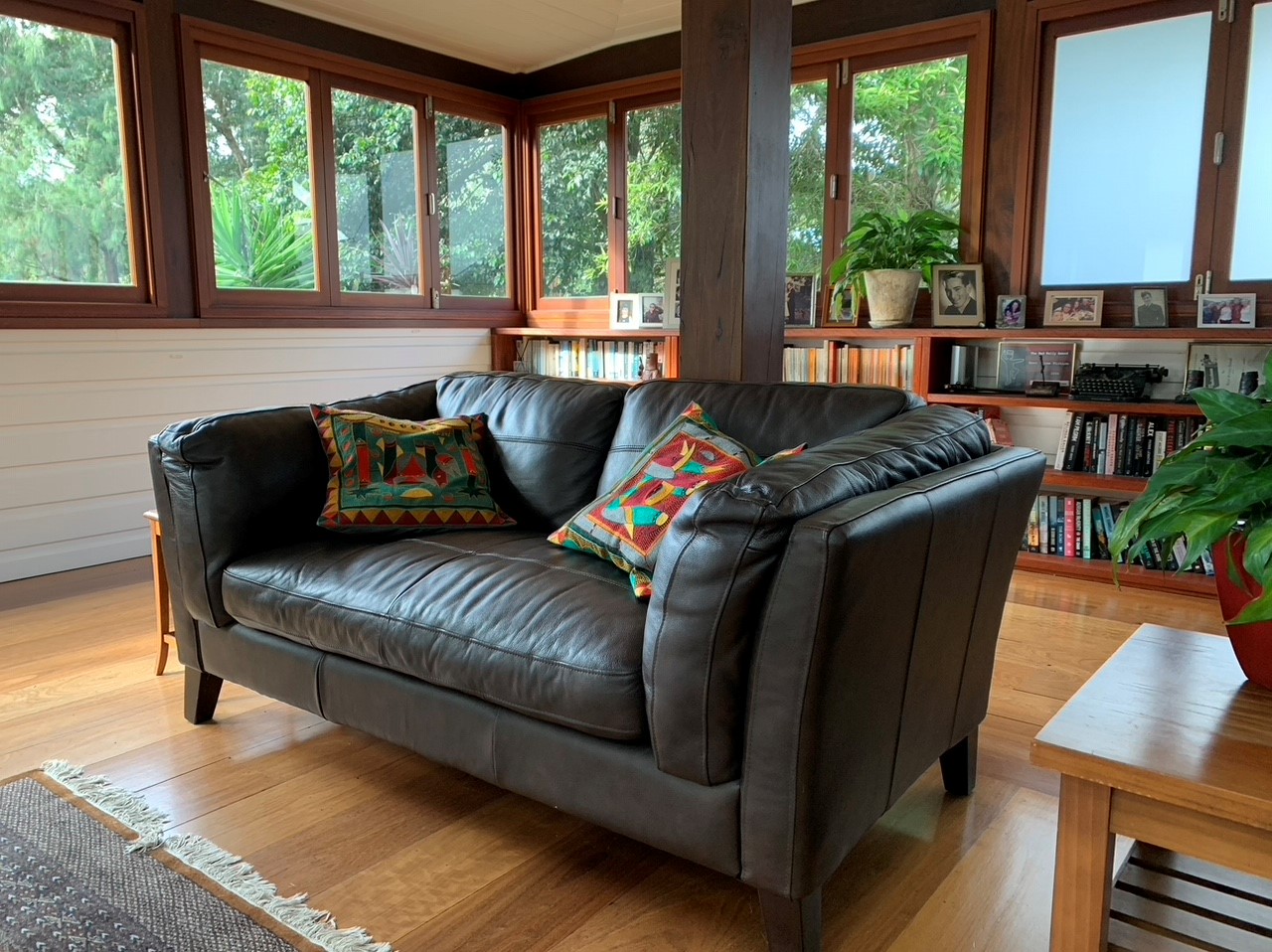 This is a wonderful winter sun-trap and also a great place to catch the summer breeze. I read the newspaper here every morning and do the cryptic crossword before sitting down to write.

This picture was taken during the filming of The Secrets She Keeps, which stars Laura Carmichael. I jokingly told a radio interviewer that I hoped to get a cameo in the series as ‘man doing crossword in café’. The producer heard the interview and phoned me up, saying, ‘We’re filming a café scene next week. Do you want to be in it?’

This picture was taken during the rehearsal before the cameras rolled. 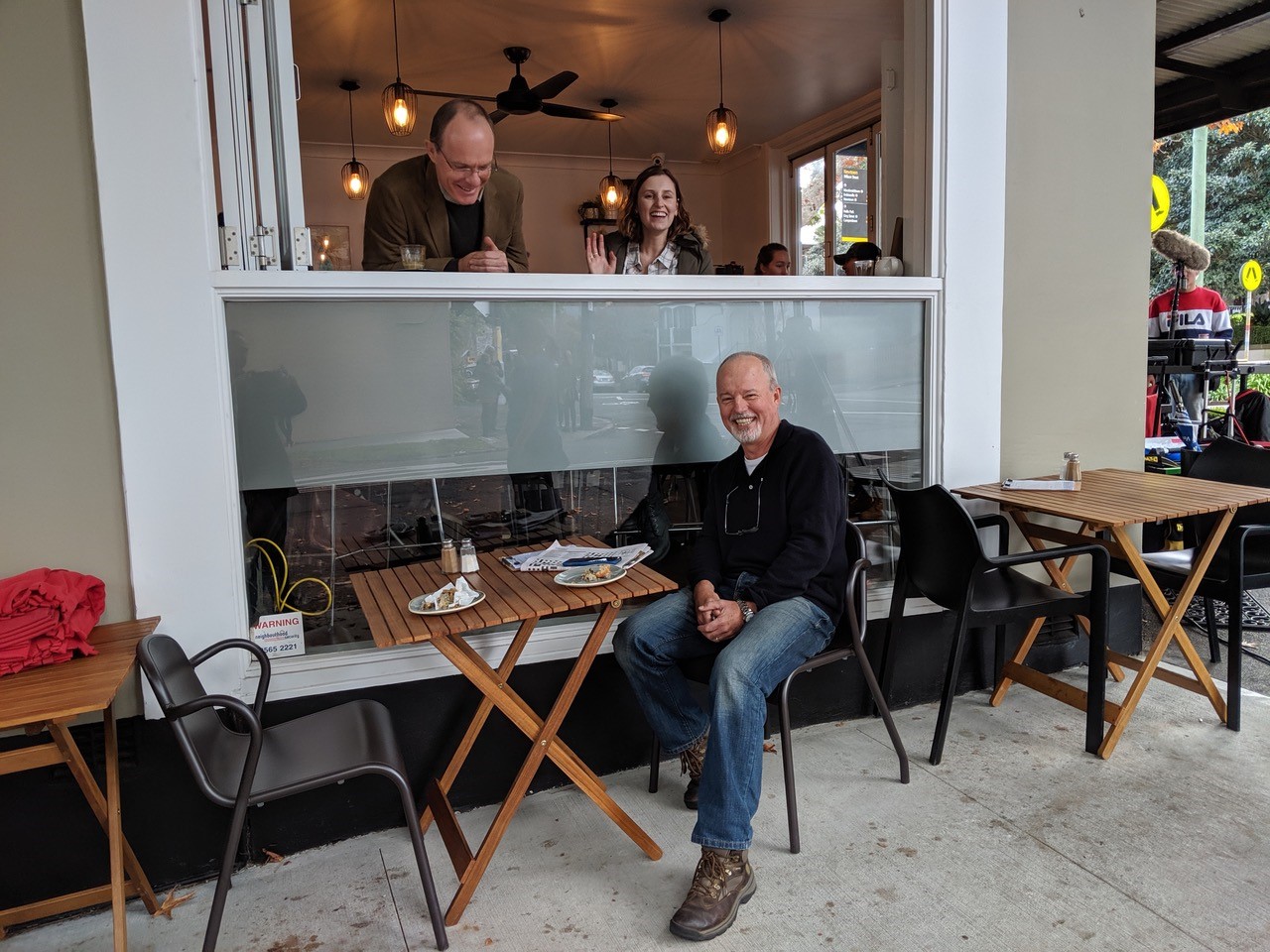 A sentence that inspires you. 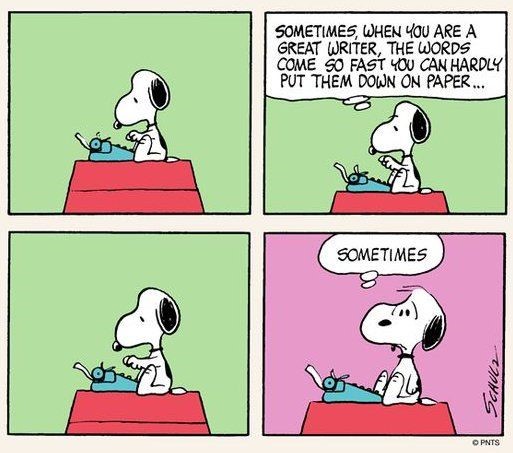 I love the Peanuts series, particularly when Snoopy plays the struggling writer. 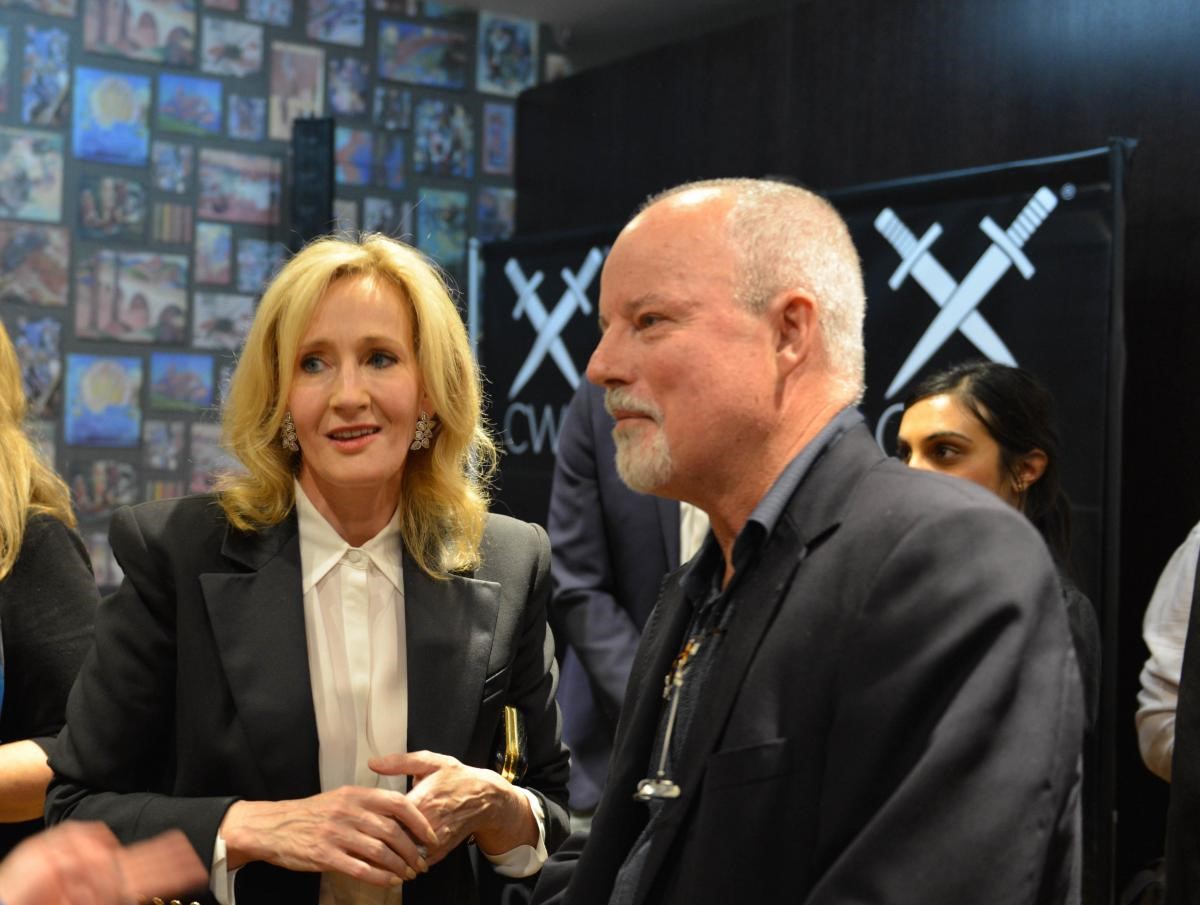 When I won the Crime Writer’s Association Gold Dagger in 2015 for Life or Death I was on a shortlist that included Stephen King and J.K. Rowling (writing as Robert Galbraith). I had no idea that Jo Rowling was in the audience, but she sought me afterwards and offered her congratulations, tweeting it to her millions of followers. She is such a class act.

Your most beloved and well-read book. 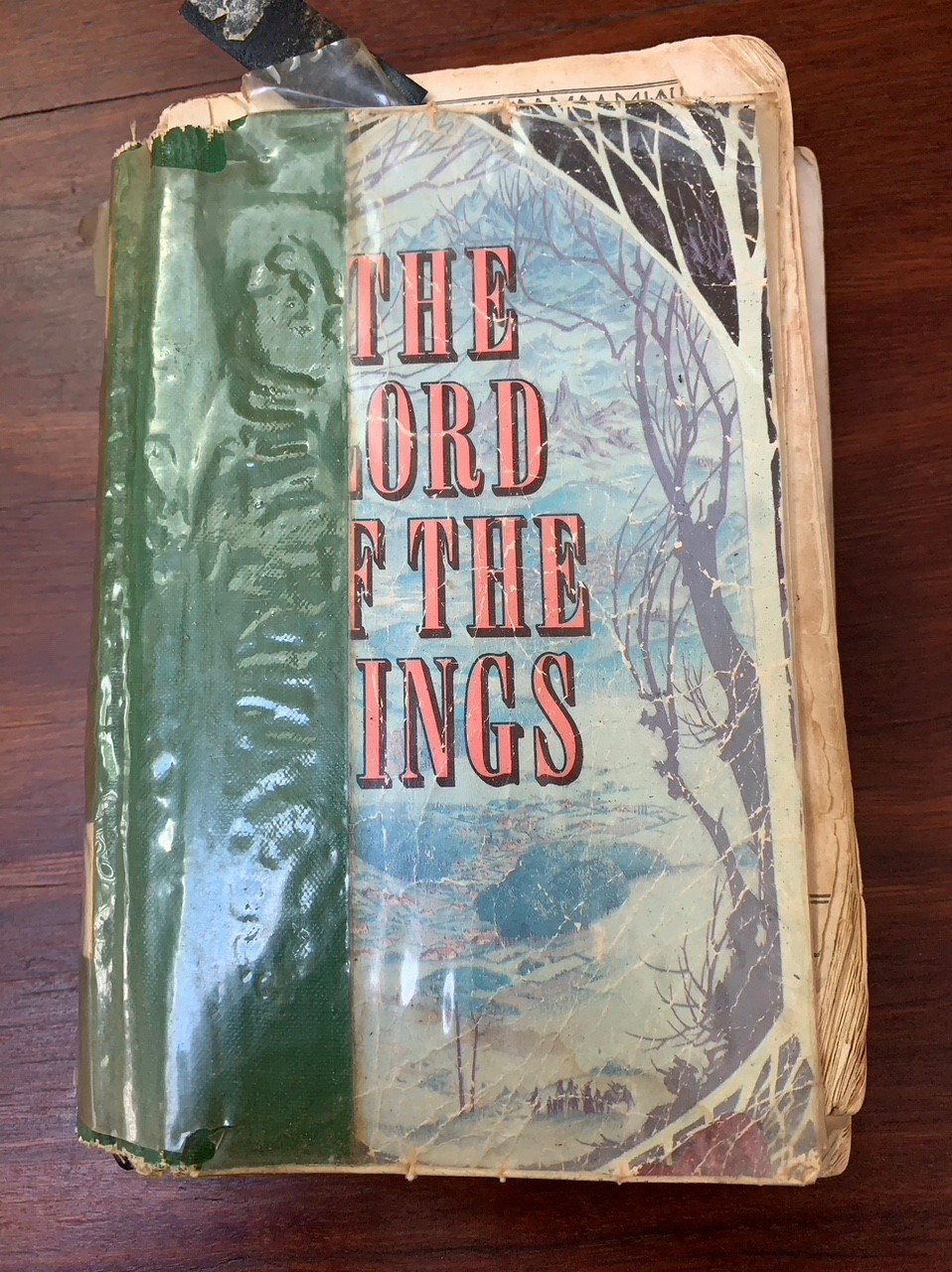 My most treasured book is a battered copy of The Lord of the Rings. When I was about 13, I borrowed this particular book from my high school library so often that the librarian, Mrs Fitzpatrick, forbade me ever taking it out again. Eventually, I took to hiding the book in the library – putting it on a shelf where I figured nobody would go looking (ie, the physics and chemistry section). Like any good librarian, Mrs Fitzpatrick could sniff out a book in the wrong place, but instead of punishing me, she gave me the book. It is battered, broken and held together with tape, but I love my copy of The Lord of the Rings because it is the first that I ever ‘earned’. 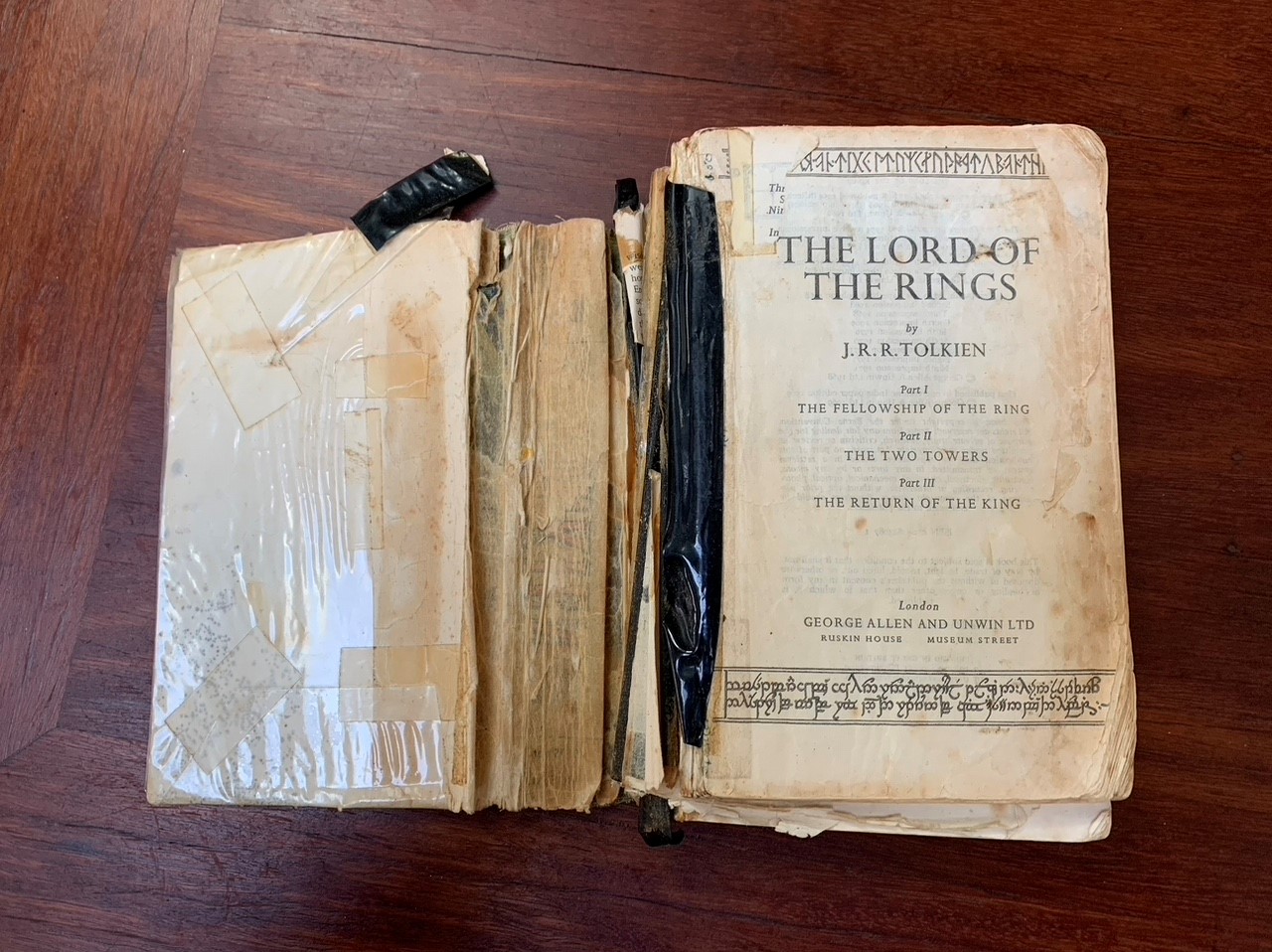 If you enjoyed this, check out more titles by Michael Robotham. You can also visit the Author Talk section of our blog to find more Author Q&As and 'Putting Authors in the Picture' features.