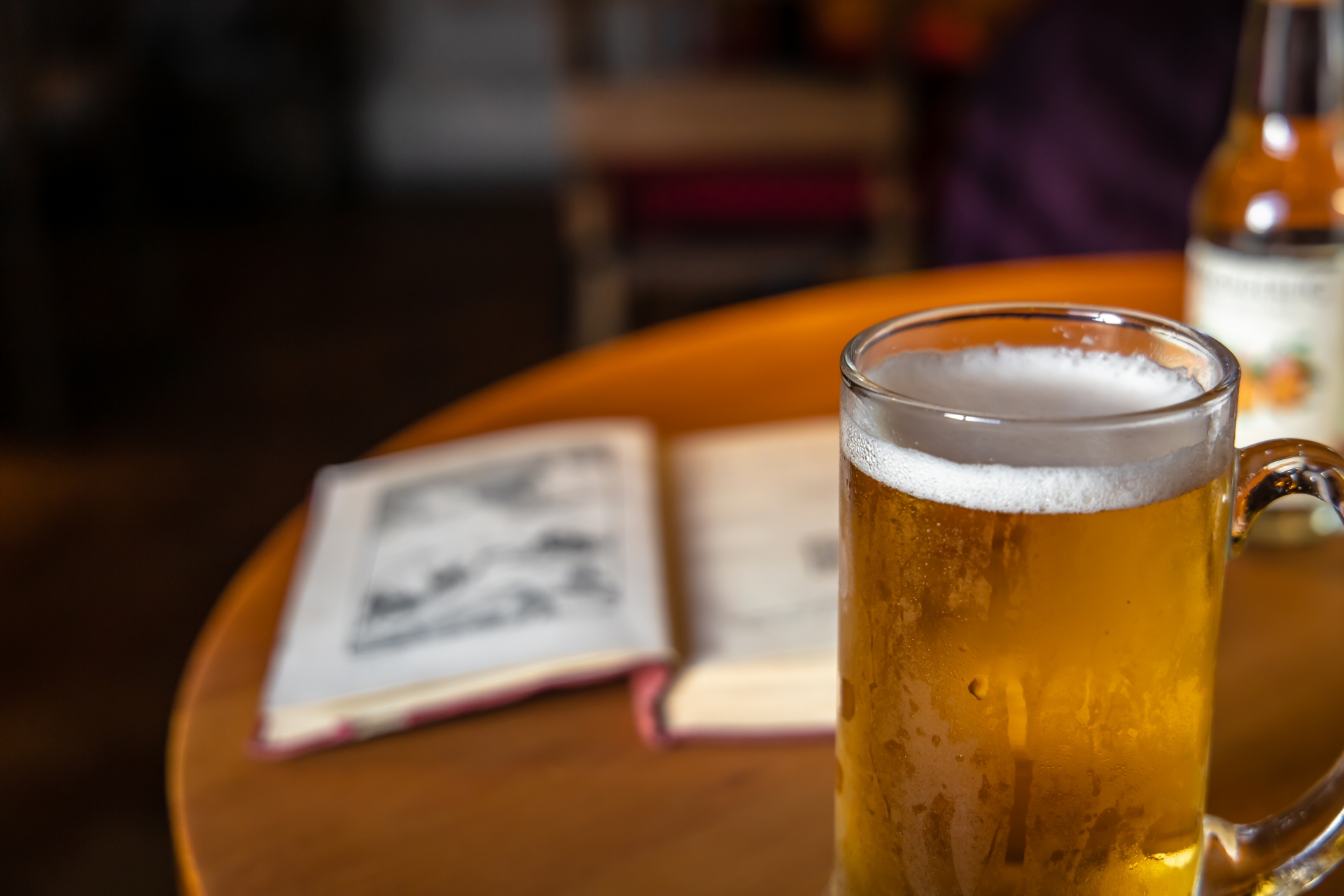 We have recently reviewed The Sadness of The King George by Shaun Patrick Hand, a book that editorial expert Joanne Owen called: “comic, characterful, and driven by a cast of larger-than-life characters”. Shaun has put together a list of his 10 favourite drinking scenes in books, have you read them, do you have any other drinking scenes that you think are fabulous?

Pubs are interesting places, especially from behind the bar. They’re an escape from the real world for many, and an unpleasant reflection of an all-too-real world for others – witness the amount of times I’ve cleaned up vomit or had someone threaten to stab me, all for the minimum wage.

That said, pub work is also a great laugh. There’s no simpering or crawling up customers’ backsides. Half the time, there isn’t even a uniform, or a contract. For better or worse, it’s honest. And you only have to get up early if you’re cleaning the lines.

That’s the kind of world I wanted to convey in my novel The Sadness of The King George: a pleasant (if occasionally grim) rut where things only change through death or getting barred. The pub in it is the kind of traditional ‘old-man pub’ that’s dying out, taking with it both good and bad things. In its place are craft ale, sugar-loaded cider, street food, and shitloads of cocaine.

Strangely, for such a complete tapestry of real life, pubs rarely seem to feature heavily in novels – the twelve I’ve read, anyway. If they do, they’re unfortunately romanticised by people who, frankly, have never poured a pint in their life. I worked in pubs round Brum and Wolves for 16 years, and I can vouch that the alcoholic in the corner can’t randomly quote Shakespeare or Socrates, but he can make sexist remarks to the bar staff and get so drunk he shits himself.

So then, here’s my pick of the pub and drinking scenes. It’s telling that, despite the age of some of them, they still hold true today. It’s perhaps equally telling that all the authors are white, eight of them are blokes, and six of those are dead (that’s a reminder to me to read more diverse fiction as much as owt else).

Alan Sillitoe knew the score. His debut novel opens with its hero, Arthur Seaton and the ‘Eleven pints and seven small gins playing hide-and-seek in his stomach.’ He stacks it down the stairs, manages to get back in, necks his twelfth pint, starts a thirteenth, throws up on a nearby couple, and staggers off to his mistress. It’s not cool, but similar fates have befallen the best of us.

The Snapper is perhaps the least well-known of Doyle’s Barrytown trilogy, overshadowed by the success of The Commitments and even The Van (they made better films, after all). Even so, Doyle – a master character writer at the best of times – has the pace, rhythm, and wit of bar conversations down to a tee here, whether it’s the girls with their vodka and coke in the lounge, embarrassing the young glass collector, or the blokes in the bar talking farts, fights, and knock-off calculators. That it’s set in a different country shows that bar-talk is a universal language.

Even though it’s named after a pub, Jamaica Inn is perhaps more famous as a novel about smugglers and mist-ridden moors – understandable because the inn hardly ever opens. But one scene where it is open still resonates. A drunken wanderer ‘establishes himself as the wit of the assembly’, but ends up a hammered figure of fun, being made to sing and dance on a table, ‘Excited by the applause that greeted him, [he] jigged up and down on the table.’ He’s then stripped naked by the baying bar-room and chucked out into the cold. It’s grim, grotesque, and you might think it’s over-the-top, but I did once see a man dance for a pint of Carling.

Coincidentally from the same year as Jamaica Inn, George Orwell’s third novel follows Gordon Comstock, a hapless poet deliberately trying to escape ‘the money god’. When he finally does get paid for some writing, he goes on a bender, mid-30s-style, desperate to impress. But after ending up in a pub where he spills his last quart of ale, he goes to a hotel with an, ahem, tart, before waking up in a police cell. Without looking, he knows he’s pissed the lot up the wall. Again, we’ve all done something similar – an old mate of mine once got carried away and blew £800 (his month’s wages) on a payday night out up Broad Street in Birmingham.

Coincidentally from a year before both Jamaica Inn and Keep the Aspidistra Flying (maybe it was a golden age for drinking books. The Thirsty Thirties, anyone?), John Steinbeck’s Tortilla Flat always stuck with me because I read it in the depths of my drifting early twenties, which is where my novel is set. Although the paisanos are wandering round Great Depression-era California, drinking wine and leaving everything until manana, I recognised something of me and one of my co-workers at the time, forever ending up in the Wetherspoons over the road after every shift, promising that we were going to get up early and sort our CVs out, then lying in until mid-morning and repeating the cycle.

Towards the end of Sarah Waters’ first novel (spoiler alert), narrator Nancy visits The Boy in the Boat, a women-only/lesbian pub near London’s Cable Street. With typical Water vividness, the song, smoke, and laughter of a night out in a hidden part of Victorian London are so real that you could be squashed up on the bench seat with them. They spend the night drinking, flirting, and eating bar food before staggering each other home. The more things change…

When I worked at Sports Direct (nee Sports Soccer), Dan who worked on trainers told me about Post Office: ‘It’s a sick book. The guy just gets pissed and dumps the mail.’ A few years later, I put a gift voucher to good use and discovered his review was bang-on. Chinaski is either drunk, hungover, having drunk sex, or not doing his job properly – a lot like a few people I’ve known, funnily enough. (Not Dan, though. He was sound as.)

I’m reading this at the sec (update: finished it last night) and have to keep reminding myself that it’s non-fiction (although as Tony Wilson said, ‘Print the legend’). The father, Malachy McCourt, is a poignant reminder that alcoholics have a life going on after they get barred from yet another pub – however dysfunctional that life may be. The grim inevitability of someone coming in ‘for one’ and ending the night aggressively begging for a tab or turning on their fellow drinkers is seen from perhaps its most unnerving perspective here. At the same time, the pervasiveness of ‘the pint’ after a hard day’s graft is thirstily captured here too, so you also end up wanting to sit in a smoky saloon with a glass of the black stuff. And all of this in a childhood memoir!

Paul Phipps-Williams, The Axe and Grindstone (2019)

Potential conflict of interest: This book is published by my current publisher (the very lovely Bad Press Ink). But no one has asked me to think that the opening scene is one of the realest evocations of Friday night in a 2010s pub in a shitty British town. I can feel my shoes sticking to the floor behind the bar; I can hear the young regulars begging for one last round of Sambuca. Most of all, I can feel the half-weary, half-angry, ‘I’m tired and sober, and I want you lot to fuck off clubbing.’ The book then takes a left-turn into pub-based sci-fi, and even then, you can tell that this is written by a guy who’s spent as much time leaning on the bar and observing as he has soaking up Dr Who.

I want to end by indulging in a little heresy. On the Road is a great and vital book, if you read it at the right time in life, but the older I’ve got (and the more I’ve learned about Kerouac), the more just… immature he seems. His genius is to recount what are basically nights on the lash with a be-bop lucidity that makes them seem like some of the most momentous happenings of the 20th century. The Subterraneans gave me this vibe first, but it’s the poetry night scene in The Dharma Bums that I’ve picked here (a great Buddhist book purely for the phrase, ‘peaceful, steaming cup of tea’). As poets read their work in a gallery, Kerouac whoops on the sidelines and walks round the audience, encouraging them to glug wine from the huge jug he’s no doubt necking himself. Now, transport that scene to a mid-week open-mic night in Wolverhampton, and what are you describing? One of those annoying pissheads who keeps calling for Wonderwall and nausing everyone until he gets kicked out or knocked out.