Born in Waikegan, Illinois on 2nd August 1920, Ray Bradbury is one of the world's best known Science Fiction authors. The range of his work is enormous – he has published some 500 stories, plays, poems and novels since his first story appeared in Weird Tales when he was 20 years old.

Ray Bradbury has written for motion pictures since 1952 when his THE BEAST FROM 20,000 FATHOMS was filmed by Warner Brothers. The following year he screen-played IT CAME FROM OUTER SPACE for Universal. In 1953 he lived for a year in Ireland writing the script for MOBY DICK for John Huston. In 1966, a film was made of his book FARENHEIT 451 by Francois Truffaut and starred Oskar Werner and Julie Christie. THE ILLUSTRATED MAN was filmed in 1986 by John Smight. Films have also been made of PICASSO SUMMER and SOMETHING WICKED THIS WAY COMES.

In 1978 the BBC1 Arts Programme Omnibus ran a fifty minute profile on the diverse talents of Ray Bradbury, talents that he has used to their full as Idea Consultant for the United States Pavilion at the New York World's Fair in 1963 and the designer of one of the rides for Disney World. He has also undertaken consultancy work on city engineering and rapid transport.

An adaptation of Bradbury's work THE MARTIAN CHRONICLES, one of his finest stories of man's attempts to colonise Mars was made into a 3-part 'mini series' starring Rock Hudson, Roddy McDowall and Gayle Hunnicutt. The series was shown on BBC1 in three weekly episodes in August 1980.

During the eighties he has been creative consultant for the architectural firm The Jon Jerde Partnership which blueprinted the Glendale Galeria, The Westside Pavilion in Los Angeles, and the Horton Plaza in San Diego. Since 1985 he has adapted forty-two of his short stories for his own half-hour show on USA Cable Television.

Killer, Come Back To Me

Something Wicked This Way Comes

Zen in the Art of Writing 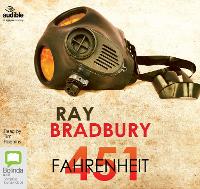 Haunted Computer and the Android Pope

When Elephants Last in the Dooryard Bloomed

Quicker than the Eye

Where Robot Mice And Robot Men Run Round In Robot Towns

S is for Space

From the Dust Returned

Golden Apples of the Sun

I Sing the Body Electric

Death is a Lonely Business

R is for Rocket

The Stories of Ray Bradbury

One More for the Road

The Golden Apples of the Sun and Other Stories