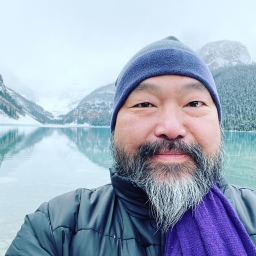 In past chapters of life, Khan has published poetry and played cello in an earnest folk-rock duo. As an internationally known hula hoop teacher and performer, he’s toured with a circus, taught workshops all over the world, and produced circus arts shows in San Francisco. He’s worked in the nonprofit arts for many years, most recently as an arts funder for a public sector grantmaking agency. The Circus Infinite is his debut novel.

Taking the notion of running away to the circus to ingenious levels, Khan Wong’s The Circus Infinite soars with whip-smart storytelling skills and inventive ideas. Part political drama, part exploration of social dynamics, part out-there space story, this kaleidoscopic adventure showcases fantasy at its most powerfully allegorical. Jes is an asexual mixed-species fugitive on the run from The Institute that wants to analyse his gravitational powers. As a result, he takes himself off to The Circus Infinite on a pleasure moon, where he finds love and a new family and sense of togetherness with a band of alien acrobats, while deploying his own unique talents in an act. But it’s not long before a crime lord blackmails Jes into undertaking terrible tasks that utilise his skills, including torture. When the gangster lines up the circus to take the blame for a drugs deal, the community rallies round. With a fabulously painted world, lively writing, and sizzlingly imaginative story, The Circus Infinite is a coming of age charmer.