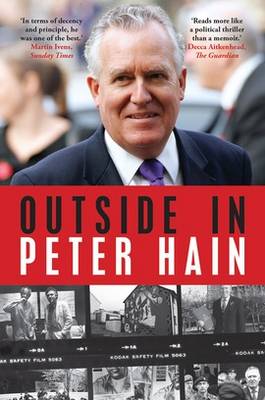 Peter Hain has lived an extraordinary life. Formerly an 'outsider' he became an 'insider', one of the last Labour government's most effective ministers. He held an array of glittering posts in the British political establishment, from key roles in the Foreign Office and the Department of Trade and Industry, to the leadership of the Commons and the brokering of the 2007 devolution settlement in Northern Ireland. But his journey to become a British Cabinet Minister started on a different continent. Growing up in Pretoria, South Africa, life changed irrevocably when a close family friend was hanged by the apartheid government. Before that, the security police had taken his activist parents away in the middle of the night. The political values he holds today spring from the injustices he witnessed growing up and which drew him into politics in the first place. As the eldest child, Hain was left to look after his younger brother and two small sisters. Thus began his career as a militant antiapartheid protester. Far from the bloated memoirs of a former government insider, this is the story of a courageous, campaigning life that is intrinsically bound up with the destiny of South Africa.

Peter Hain is Labour MP for Neath and shadow secretary of state for wales.

More About Peter Hain
Add To Wishlist
Buy from our bookstore and 25% of the cover price will be given to a school of your choice to buy more books.