Textiles and Textile Production in Europe

There is evidence that ever since early prehistory, textiles have always had more than simply a utilitarian function. Textiles express who we are - our gender, age, family affiliation, occupation, religion, ethnicity and social, political, economic and legal status. Besides expressing our identity, textiles protect us from the harsh conditions of the environment, whether as clothes or shelter. We use them at birth for swaddling, in illness as bandages and at death as shrouds. We use them to carry and contain people and things. We use them for subsistence to catch fish and animals and for transport as sails. In fact, textiles represent one of the earliest human craft technologies and they have always been a fundamental part of subsistence, economy and exchange. Textiles have an enormous potential in archaeological research to inform us of social, chronological and cultural aspects of ancient societies. In archaeology, the study of textiles is often relegated to the marginalised zone of specialist and specialised subject and lack of dialogue between textile researchers and scholars in other fields means that as a resource, textiles are not used to their full potential or integrated into the overall interpretation of a particular site or broader aspects of human activity. Textiles and Textile Production in Europe is a major new survey that aims to redress this. Twenty-three chapters collect and systematise essential information on textiles and textile production from sixteen European countries, resulting in an up-to-date and detailed sourcebook and an easily accessible overview of the development of European textile technology and economy from prehistory to AD 400. All chapters have an introduction, give the chronological and cultural background and an overview of the material in question organised chronologically and thematically. The sources of information used by the authors are primarily textiles and textile tools recovered from archaeological contexts. In addition, other evidence for the study of ancient textile production, ranging from iconography to written sources to palaeobotanical and archaeozoological remains are included. The introduction gives a summary on textile preservation, analytical techniques and production sequence that provides a background for the terminology and issues discussed in the various chapters. Extensively illustrated, with over 200 colour illustrations, maps, chronologies and index, this will be an essential sourcebook not just for textile researchers but also the wider archaeological community.

'this is a magnificent work of reference, which deserves a place on the bookshelf of anyone with an interest in European prehistory and the Roman period.'--Penelope Walton Rogers Antiquity, 2012 (86) 'Textiles and Textile Production in Europe succeeds in giving a comprehensive overview of ancient textile studies in Europe and in the methodology for study of such fragile remains of the past. Congratulations to the editors.'--Ana Cabrera Textile History, 2013 (44) '...a well produced volume with many useful illustrations and well compiled material. Drawing this information together in English is useful for many people, and I can heartily recommend the book for beginners as well as established researchers - a 'must' for all well equipped academic and institutional libraries.'--Sophie Bergerbrant The Archaeological Journal, Vol. 169 (2012) 'Textiles and Textile Production in Europe is a handsome volume that is a good introduction to archaeological textiles from the Prehistory and Early History of Europe.'--Lise Bender Jorgensen Textile, 2013 (Volume 11)

Ulla Mannering is a widely published author with a PhD in prehistoric archaeology from the University of Copenhagen in Denmark. She is one of the initiators of the Danish National Research Foundation's Centre for Textile Research in Copenhagen and Senior Researcher at the National Museum of Denmark. She is specialized in prehistoric skin and textile production and clothing design in Northern Europe. She has also worked with Roman textiles and clothing. Her current research focuses on resource exploitation and design in Scandinavian Bronze and Early Iron Age societies. 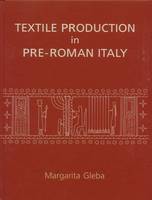 View All Books By Margarita Gleba