Rumpole and the Old Familiar Faces

Desmond Barrit stars as Horace Rumpole in this full-cast, feature-length radio drama Rumpole has no special objection to Christmas - except that with the Old Bailey closed, he has no opportunity to exercise his skills in court. But over the course of one unusual holiday, he nonetheless manages to triumph in two very different cases... Dragooned into spending Christmas in Norfolk, at the home of one of Hilda's old schoolfriends, Rumpole is feeling less than festive. Chilly Coldsands Rectory does not offer much in the way of enjoyment - but a trip to the local church and a surprise encounter with an old acquaintance leads to a God-given opportunity to indulge in a little seasonal, charitable blackmail. A New Year outing to see Aladdin also provides more excitement than expected. The traditional British pantomime is one of Rumpole's favourite institutions, but he has a vague feeling that there's something odd about this particular production. A post-panto drink, some overheard remarks and a glance at the programme confirm his suspicions - and put him on the path to solving an audacious crime... Starring Desmond Barrit as Rumpole and Joanna David as Hilda, with Tim McInnerny as Donald Compton and Nigel Anthony as Fred Timson. Written by John Mortimer Directed by Marilyn Imrie Produced by Catherine Bailey Pantomime music written and played by Neil Brand A Catherine Bailey production for BBC Radio 4 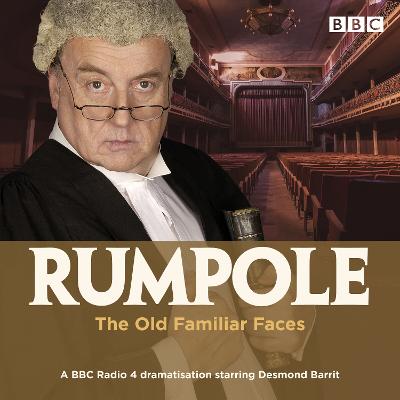 John Mortimer was born on 21 April 1923. His father was a successful divorce lawyer, and was to be a considerable influence on his son's life. Schooled at Harrow, Mortimer went on to study law at Brasenose College, Oxford. On finishing his degree, he was called to the Bar in 1948 and entered his father's chambers. At first he followed his father and specialised in divorce cases, but he soon switched to criminal law, as he maintained that murderers and the like were nicer to work with than divorcing spouses. In 1966 he became a Queen's Counsel, and he continued to work as a ...