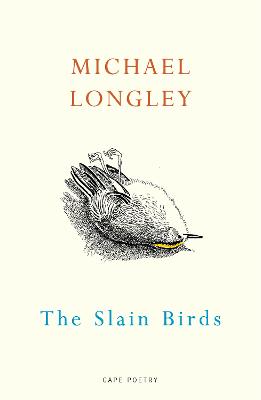 **WINNER OF THE 2022 FELTRINELLI INTERNATIONAL POETRY PRIZE ** 'One of the most perfect poets alive. There is something in his work both ancient and modern. I read him as I might check the sky for stars.' Sebastian Barry Michael Longley's new collection takes its title from Dylan Thomas - 'for the sake of the souls of the slain birds sailing'. The Slain Birds encompasses souls, slayings and many birds, both dead and alive. The first poem laments a tawny owl killed by a car. That owl reappears later in 'Totem', which represents the book itself as 'a star-surrounded totem pole/ With carvings of all the creatures'. 'Slain birds' exemplify our impact on the creatures and the planet. But, in this book's cosmic ecological scheme, birds are predators too, and coronavirus is 'the merlin we cannot see'. Longley's soul-landscape seems increasingly haunted by death, as he revisits the Great War, the Holocaust and Homeric bloodshed, with their implied counterparts today. Yet his microcosmic Carrigskeewaun remains a precarious 'home' for the human family. It engenders 'Otter-sightings, elvers, leverets, poetry'. Among Longley's images for poetry are crafts that conserve or recycle natural materials: carving, silversmithing, woodturning, embroidery. This suggests the versatility with which he remakes his own art. Two granddaughters 'weave a web from coloured strings' and hang it up 'to trap a big idea'. The interlacing lyrics of The Slain Birds are such a web.