While the First World War devastated Europe, it inspired profound poetry - words in which the atmosphere and landscape of battle are evoked perhaps more vividly than anywhere else. The poets - many of whom were killed - show not only the war's tragedy but the hopes and disappointments of a generation of men. In Some Desperate Glory, historian and biographer Max Egremont gives us a transfiguring look at the life and work of this assemblage of poets. Wilfred Owen with his flaring genius; the intense, compassionate Siegfried Sassoon; the composer Ivor Gurney; Robert Graves who would later spurn his war poems; the nature-loving Edward Thomas; the glamorous Fabian Socialist Rupert Brooke; and the shell-shocked Robert Nichols all fought in the war, and their poetry is a bold act of creativity in the face of unprecedented destruction. Some Desperate Glory includes a chronological anthology of their poems, with linking commentary, telling the story of the war through their art. This unique volume unites the poetry and the history of the war, so often treated separately, granting readers the pride, strife, and sorrow of the individual soldier's experience coupled with a panoramic view of the war's toll on an entire nation.

Our impressions of the Great War have been strongly influenced by the young poets who composed a collective elegy for their generation of ‘doomed youth’. But in this chronological anthology Egremont notes they were a diverse group from contrasting backgrounds. Consequently, their verse conveys a variety of emotions and attitudes from patriotic pride to weary cynicism. He also challenges some myths: Wilfred Owen wrote shortly before his death that there was nowhere he would rather be than at the front; Gurney and Blunden only found their voice after the guns had fallen silent; Robert Graves came to disdain his war poetry, while Sassoon rarely bettered his. 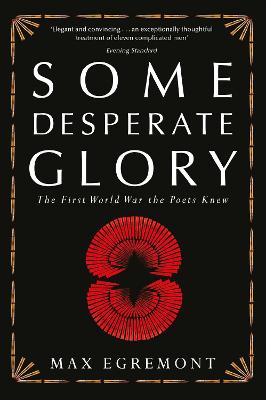