'A beguiling author who interweaves past and present' The Times __________________ Serpent's Point in South Devon is the focus of local legends. The large house on the headland is shrouded in an ancient tale of evil, and when a woman is found strangled on the coastal path DI Wesley Peterson is called in to investigate. The woman had been house-sitting at Serpent's Point and Wesley is surprised to discover that she was conducting an investigation into unsolved missing persons cases. Could these enquires have led to her murder? While the case takes Wesley to Yorkshire and the Cotswolds, archaeologist Neil Watson is making a dramatic discovery of his own in the fields near the house. When a skeleton is uncovered, the pressure rises to find a killer, and Wesley and Neil realise that Serpent's Point holds more secrets than anyone could have imagined. 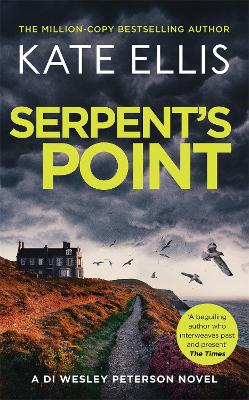 Kate Ellis was born and brought up in Liverpool and studied drama in Manchester. She is the award-winning author of the DI Wesley Peterson detective novels, as well as the Albert Lincoln trilogy and the Joe Plantagenet mysteries. Kate has won the CWA Dagger in the Library Award for her crime writing. She has also twice been shortlisted for the CWA Short Story Dagger and been longlisted for the Theakston's Old Peculier Crime Novel of the Year Award. Visit her online at: www.kateellis.co.uk