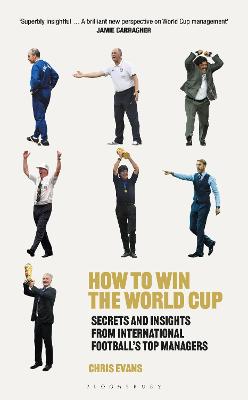 How to Win the World Cup

How to Win the World Cup Synopsis

Master tacticians, crazy tyrants and lucky generals... This insightful investigation reveals the mindsets and, frankly, at times unbelievable approaches of the coaches who strive to deliver football's ultimate prize.

HOW DO YOU WIN THE WORLD CUP?

Godlike genius or the focus of a disappointed nation's fury - the world's most prestigious tournament makes or breaks a national coach. Only 20 managers have guided their team to World Cup glory, so what are their secrets? From revolutionary tactics to hare-brained schemes, this book searches for the keys to the most exclusive club in international football.

They may silently plot on the bench or manically gesticulate from the sidelines, but what can the coach really do to influence their team's performance? Discover the tactical innovations and brilliant strategies as well as the bizarre superstitions, psychological masterclasses and bonkers team-building regimes that managers have employed in the quest for that iconic trophy.

Charting the successes, failures, dramas and controversies of 90 years of World Cup action, through the insights of journalists, players and managers with first-hand experience of World Cup competition, this book comprehensively documents the lengths the man in the dugout will go to in order to bring home the greatest prize.

If you like a rich and rewarding football read, look no further - Patrick Barclay

An incisive analysis of the beautiful game at its highest levels... a must-read for soccer fans - Publishers Weekly

Chris Evans began his broadcasting career at Manchester's Piccadilly Radio, going on to become a household name in TV and radio. He launched and presented the hugely successful Channel 4 shows The Big Breakfast, Don't Forget Your Toothbrush and TFI Friday, before moving to radio in 1996. Chris hosted Radio 1's flagship breakfast show, attracting 7.5m listeners, Virgin Radio's breakfast show and went on to join Radio 2 in 2005. He soon moved to the prestigious Breakfast Show, succeeding Sir Terry Wogan and exceeding his listening figures, before re-joining television on BBC One's The One Show. He can commonly be seen cavorting and entertaining the nation every Friday, as the show's co-host.

More About Chris Evans
Add To Wishlist
Buy from our bookstore and 25% of the cover price will be given to a school of your choice to buy more books.