LoveReading View on The Yellow Wall-Paper, Herland, and Selected Writings

Charlotte Perkins Gilman was America’s foremost feminist thinker of the early twentieth century. Her most famous work, The Yellow Wallpaper, was first published in 1892 and still resonates with a powerful representation of mental health and issues around women’s creativity and self-expression.

Its narrator is a middle-class woman married to a physician. Suffering from post-natal depression, her husband “does not believe that I am sick!” beyond having a “slightly hysterical tendency”. And so he and her brother (also a doctor) have decreed that she simply needs to take air and exercise and not work (i.e. write) until she is well again. Never mind that she believes that “congenial work with excitement and change, would do me good”. Her agency removed, she starts to see a woman in the wallpaper of her room. She sees the woman creeping and crawling, “all the time trying to climb through” - an act of escape the narrator follows, to her husband’s horror.

With tremendous power, prescience and stark lyricism, this offers a cutting critique of the ways in which women are infantilised, and hampered by male institutions.

Wonderfully sardonic and slyly humorous, the writings of landmark American feminist and socialist thinker Charlotte Perkins Gilman were penned in response to her frustrations with the gender-based double standard that prevailed in America as the twentieth century began. Perhaps best known for her chilling depiction of a woman's mental breakdown in her unforgettable 1892 short story 'The Yellow Wall-Paper', Gilman also wrote Herland, a wry novel that imagines a peaceful, progressive country from which men have been absent for 2,000 years. Both are included in this volume, along with a selection of Gilman's major short stories and her poems. 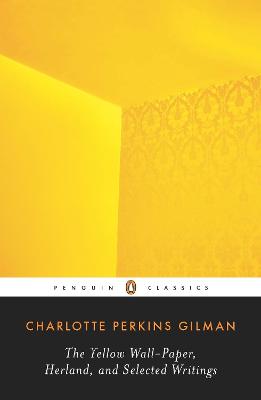 Charlotte Perkins Gilman (1860-1935) was born in New England, a descendant of the prominent and influential Beecher family. In 1884 she married Charles Water Stetson. After giving birth, Charlotte sank into a deep depression. She entered a sanitarium in Philadelphia to undergo the 'rest cure', a controversial treatment, which forbade any type of physical activity or intellectual stimulation. 1892, she published the now-famous story 'The Yellow Wall-Paper'. In 1898, her most famous nonfiction book, Women and Economics, was published. With its publication, and subsequent translation into seven languages, Gilman earned international acclaim. In 1900, she married her first cousin, George Houghton Gilman. Over the ...