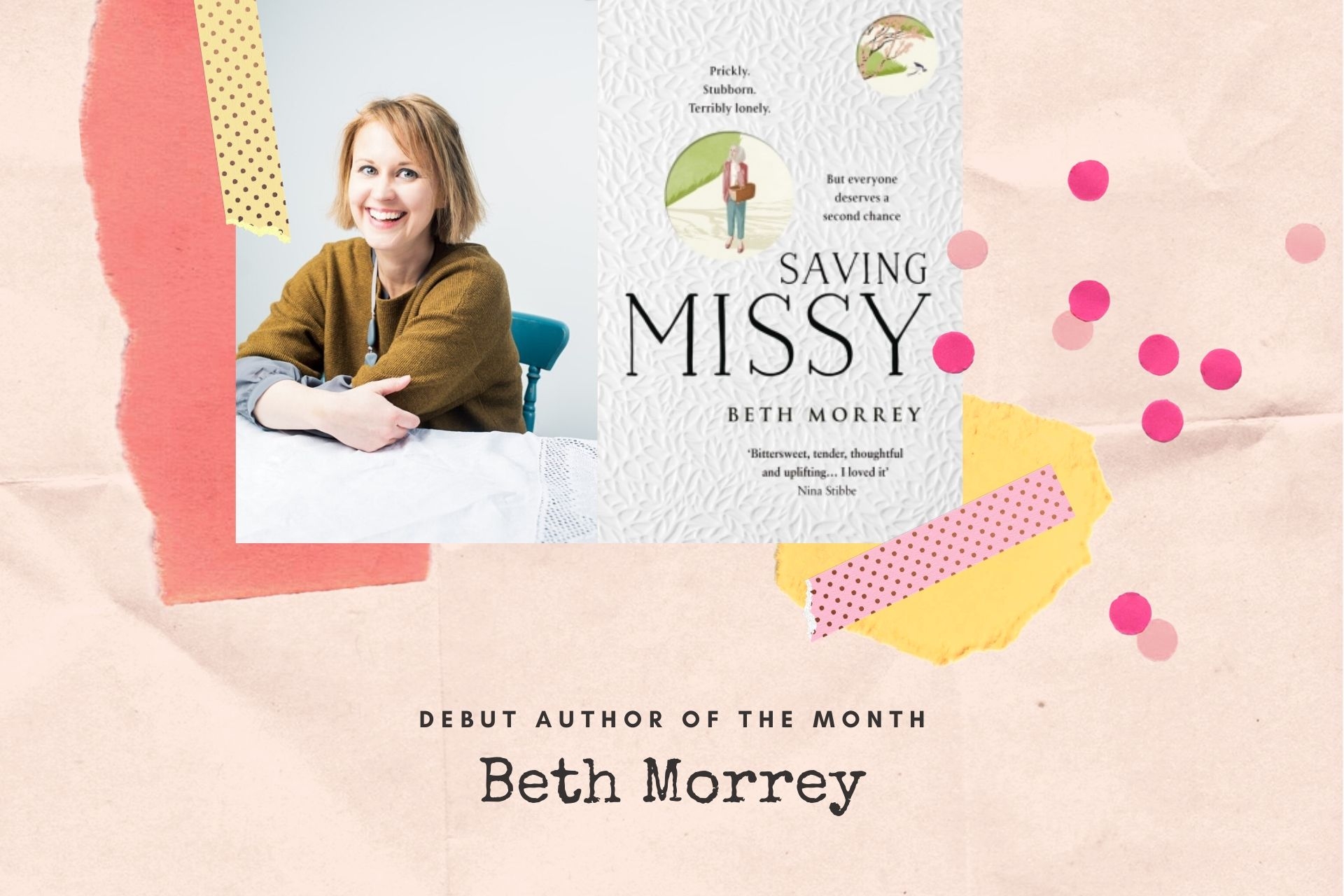 Following on from our blog post There’s Something About A Debut, we would like to introduce you to our new bi-monthly Debut Author feature, which starts in fine style with Beth Morrey. Beth is author of the truly wonderful Saving Missy, a book that is ultimately beautifully uplifting, though there may be some tears to be shed along the way. I recommended Saving Missy far and wide, and closer to home will never forget hearing sobbing coming from my Mum's room, to discover her in bits over ’that part’. She waved me away so she could carry on reading, as she simply couldn’t put it down. She absolutely adored Missy, and was thrilled to find a novel with an older star, who had issues that she could relate to and feel a part of, she in turn recommended Missy to all of her friends.

Beth has kindly agreed to join our LoveReading Very Short Story Award judging panel as our debut author judge for 2020. Since our inaugural award in 2018 we have had a different debut author judge each year, with Preti Taneja author of We That Are Young and Rachel Edwards author of Darling sitting as previous judges. Here, Beth tells us a little about her author journey. I love hearing the story about how a first book comes to life, from initial thoughts, to finding a publisher, through to the process of launching a debut. Beth, you’ve made me laugh, you’ve made me cry, you’ve given me all the feel-goods, and I seriously can't wait for book two!

The first time I remember putting pen to paper was when I was six or seven years old, and we wrote about Icarus in school. Everyone managed a page, but I just carried on and on - could have done with an editor! Despite being very young, I remember feeling a strange contentment, like I was doing exactly what I wanted to do. From then on, I wrote all the time – cringeworthy diaries, Malory Towers spin-offs, comedy sketches. After writing something – even a nicely-worded text – I feel calm, like I’ve scratched an itch. 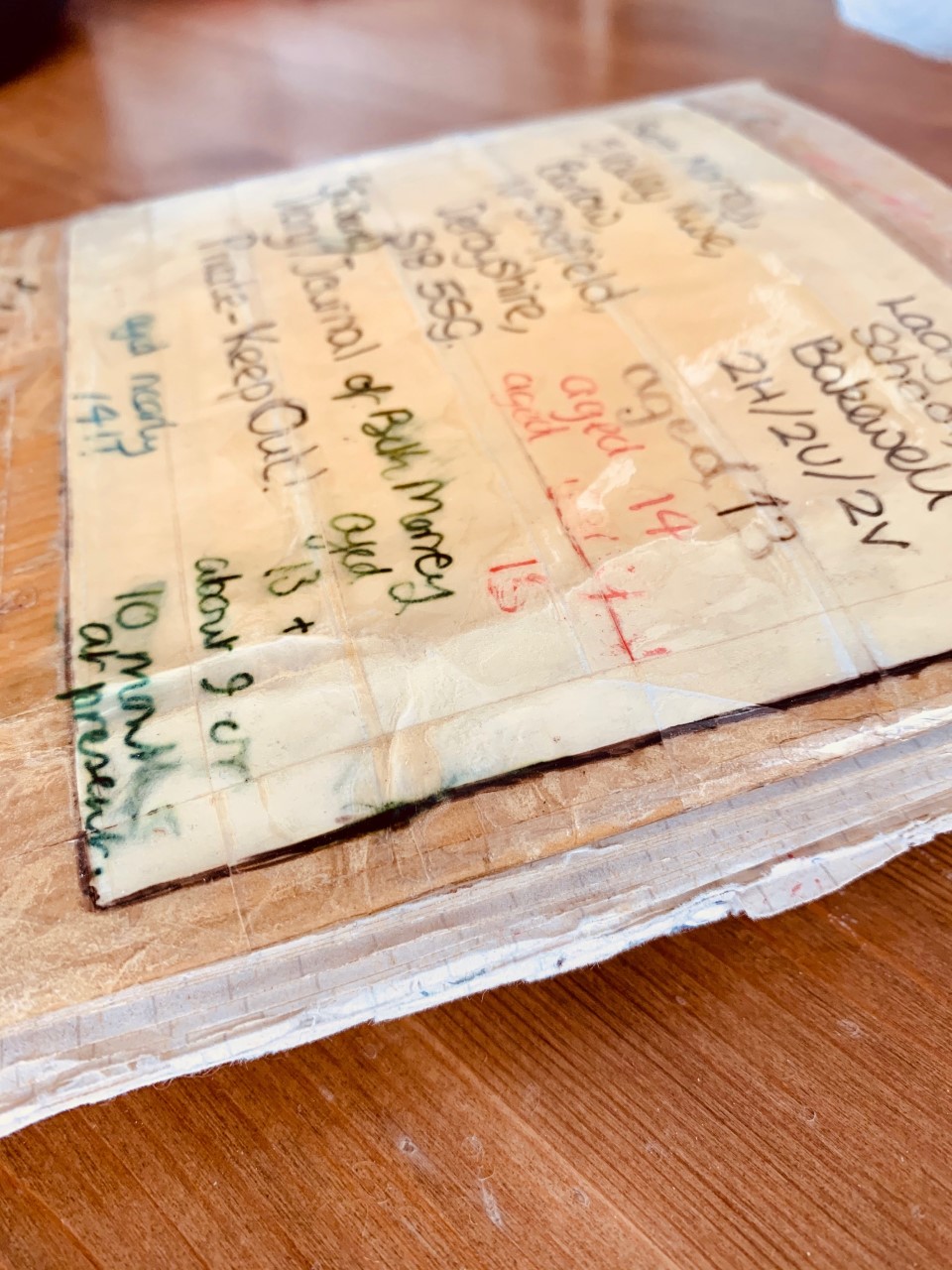 It was probably A Little Princess, by Frances Hodgson Burnett. Such an uplifting book with a powerful social message, but it also has tremendous darkness, and is just a great, riveting story with wonderful warmth and rhythm. I still have my copy somewhere – now I want to dig it out to read it again, and cry when Carrisford finds Sara.

As a child, my dad read me Watership Down at bedtime – early on, there’s a tiny description in it, a bee buzzing in the background, and I thought how tremendous that was, to weave a tale with such dense detail. I decided that one day I would like to write a book like that, and see the spine with my name on a shelf in a shop. Haven’t quite got round to my epic rabbit fantasy yet though… 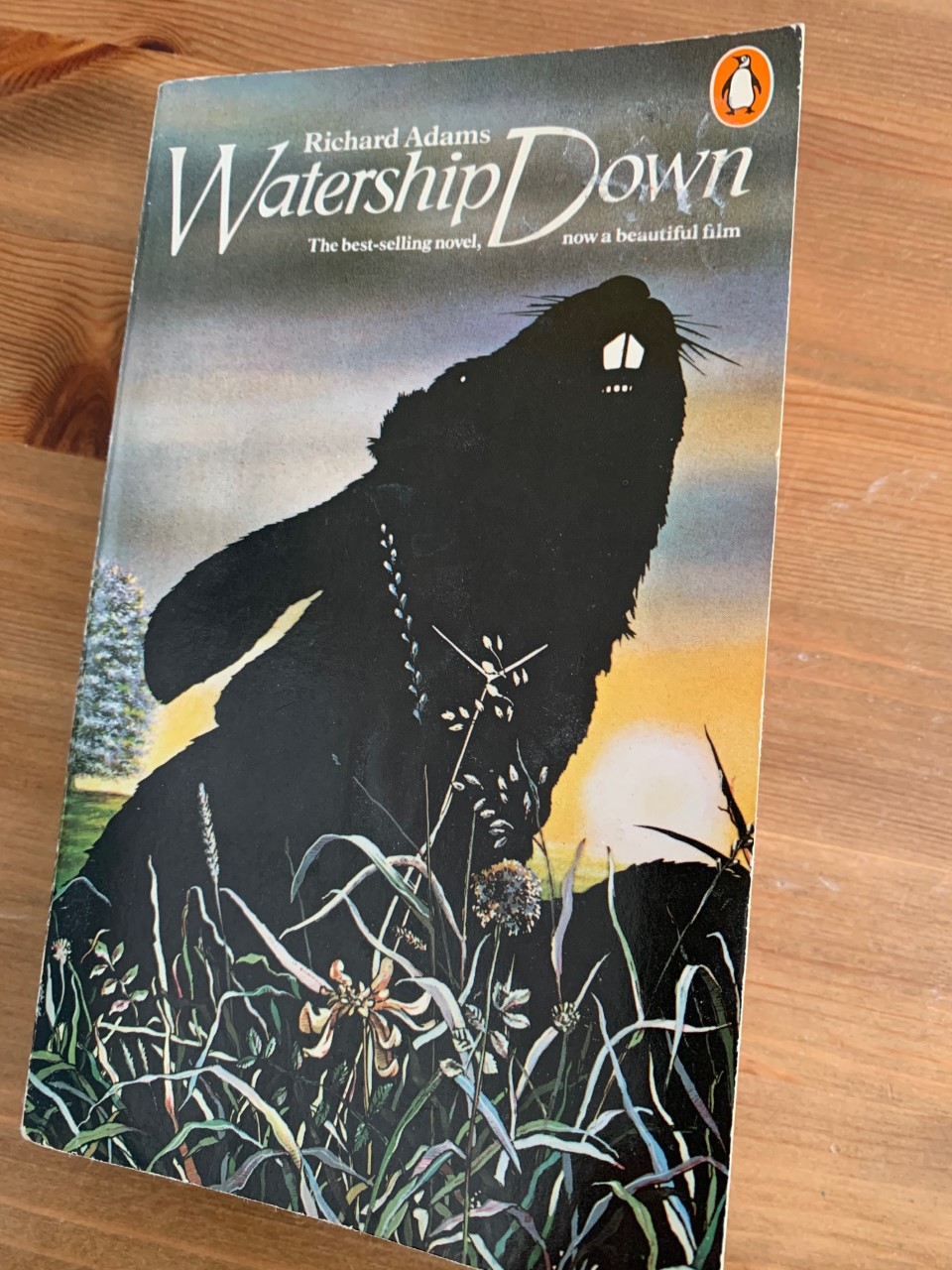 For how long was Missy keeping you company before she stepped onto the page?

I was on maternity leave, and planned the book for around nine months before writing anything – I didn’t even make many notes, just heard her voice in my head as I pushed the pram round the park. When I finally started writing, it seemed to flow easily because I knew her so well. There is a lot of me in Missy, but she’s also inspired by Barbara Covett from Notes on a Scandal. I loved Barbara’s waspish, aloof tone, and was interested in creating a redeemable version of her.

How long was the process for you, from starting to write about Missy through to being told you had a publishing deal?

I started writing the book in October 2016 and finished the first draft in March the following year. After editing it for several months, I began querying, found an agent in June 2018 and the deal was done by September. That makes it sound brisk and efficient, but obviously it wasn’t quite so straightforward. The hardest parts were editing the book and finding an agent. I could edit FOREVER – it’s never ‘right’ or finished – and querying agents is tough, particularly if, like me, you know nothing about the publishing industry. I stumbled around a lot before I found my feet.

Nothing. I like the fact that I didn’t know anything – that I had no idea what was to come; had to learn and make mistakes, get better, be surprised, challenged and delighted by things that happened. If I had known any of it beforehand, it might have changed the journey, and I don’t think I would change a thing. Except for wearing those gold shoes to my launch party – my toes were in shreds. 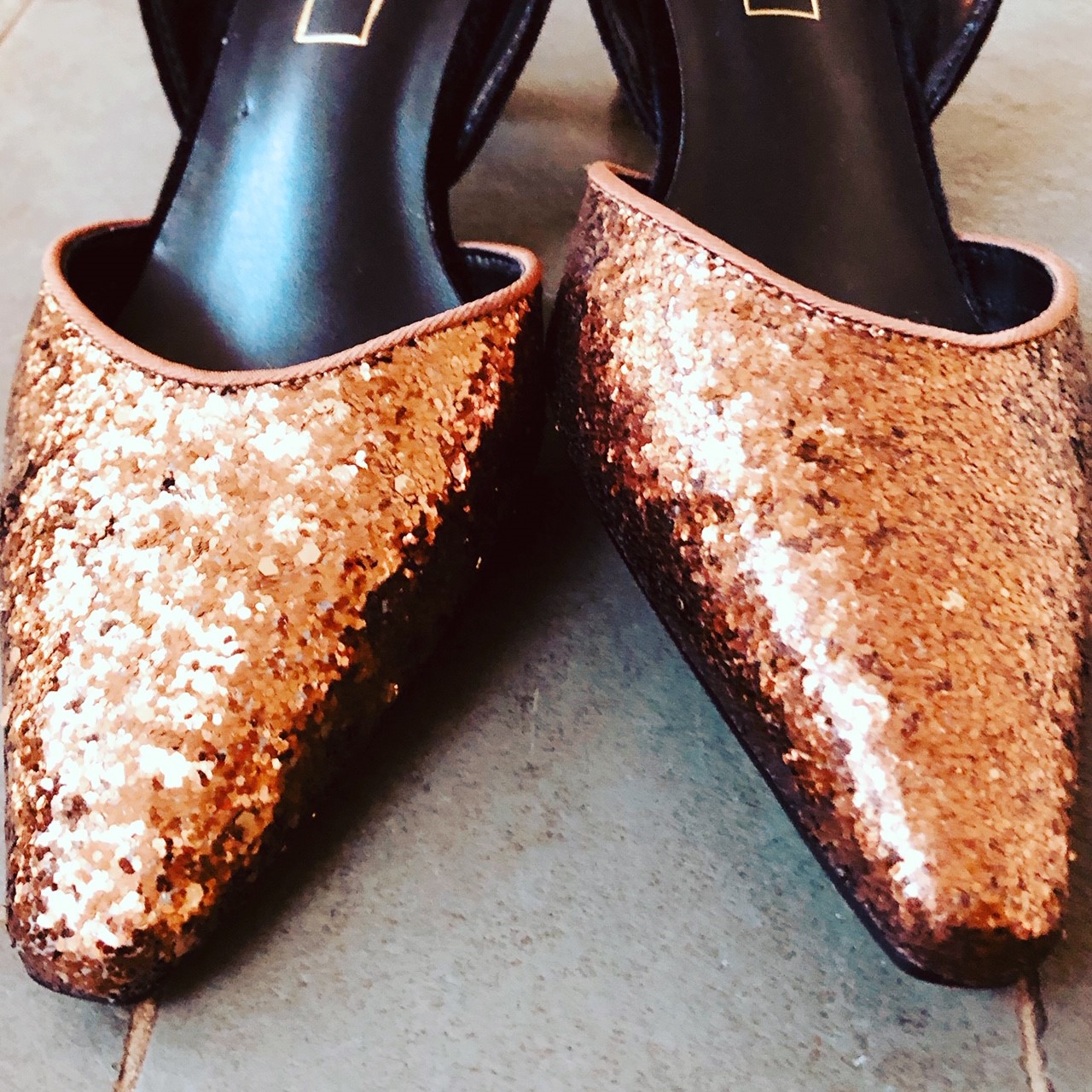 What were you doing and how did you celebrate when you first heard Missy was going to be published?

When the first offers came in, I was waiting for an ambulance. On my way home from work, I found a confused and elderly lady in the street having breathing problems, so I had to call for help and stay with her. As we were talking, and the paramedics were arriving, my phone kept bleeping with e-mails, and my husband was trying to ring me asking for news, but I had to stay and help. She was fine, but the whole experience was a bit unsettling, so I think I went home and drank quite a lot to calm myself down. It was also my birthday that day, which was weird. To celebrate my deal, I bought a skirt from Whistles, and we got a new window for the living room.

How long it is! The deal was done in September 2018 but my book didn’t come out until February 2020. It takes a lot of work and time to launch a debut author – so many people involved in the process. Also, I was struck by how generous and supportive everyone in the publishing industry is. Other writers taking the time to read and quote, publishers merrily circulating proofs, doing panel events with other authors – it’s all very jolly and convivial, even if we do secretly hate each other for writing brilliant books. I’m wildly jealous of pretty much everyone.

When did you first realise that Missy was striking a chord with readers?

I don’t read reviews anymore, because it’s too unnerving and more likely to upset me than make me happy. However, pre-publication, when I used to lurk on various sites to see what people were saying, one reviewer said it made her believe that there are decent people in the world. I sort of wrote it for that reason, to make myself believe that there are good people out there, so that really chimed with me. Also, someone wrote a very cross review, complaining about a sad thing that happens in the book – how if she’d known that would happen then she never would have read it. I enjoyed that a lot because it showed how engaged she was!

Every single day. Years ago, I had a dream where I won the lottery – a huge amount of money – and in the dream I kept asking my mum if it was real; if it was really happening, we’d really won. And she kept saying ‘yes, it’s really happening,’ so when I woke up, I was livid that it was all a fantasy. For months and months after my book deal, I kept wondering if I was having another of those dreams. Even now, it doesn’t seem real, like I’ve sidled into a parallel universe. Maybe I have. That’s a book right there…

I can show you loads! Here are three: holding my finished book for the first time; with two of my oldest friends at my launch party; having a celebratory glass of wine when Missy made the Sunday Times bestseller list. Whatever happens next, I’m hugely grateful for all those moments.

I’m writing Book 2. It’s really hard work, because I feel quite self-conscious. With the first book, it was just a hobby, a little treat to go to a café and see what came out. But this time I have editors, and deadlines, and a level of expectation I’m not used to. I’ve also forgotten how to write a book, which I gather is a regular problem for authors. If it bears any resemblance to my current (83rd) draft, Book 2 tells the story of a struggling single mum who wants to make her life better. It’s about ambition, the awesomeness of teachers, the triumph of the underdog. Talking of dogs, it also features a cocker spaniel called Bernadette, though hers is a minor role. In addition, I’m writing a weekly blog about the TV I’m watching in lockdown. It turns out I watch a LOT of telly. I would be on Book 5 if it weren’t for Netflix.