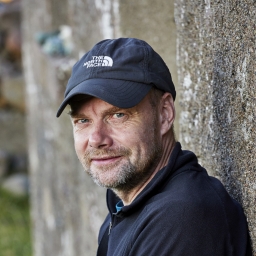 Geoff Allan is Scotland's premier bothy expert: founder of the `Bothies on a Bike' blog he has hiked, biked and slept the night in each and every Scottish bothy. Trained as a surveyor, he is a professional photographer and joint maintenance office for an MBA bothy on the Isle of Rum. He is Scottish and lives in Edinburgh.

Geoff told us a bit more about bothies and his new book, Scottish Bothy Walks;

Can you tell us what a bothy is? In essence, a bothy is a form of rough and ready accommodation, traditionally a place to house farm labourers or estate workers. However, more recently the term has been used to describe open shelters which are found in the wilderness areas of Scotland (and other remote places in the UK and Ireland). Typically, mountain bothies are shepherd’s cottages, estate houses or abandoned crofts that have been saved from ruin and renovated. Freely available for anyone to use, with no booking system or wardens, there is a whole network of bothies just waiting to be discovered in the most far-flung corners of the country. Over the last 50 odd years, the bothy system was formalised and developed by the Mountain Bothies Association (MBA), an organisation which maintains over 100 properties, with the agreement and support of the estates which own them. Bothies are found in some of the most stunning, out of the way places, and are welcome sanctuaries when you are out roaming the hills, especially in bad weather! They vary in size from Easan Dorcha, affectionately known as the 'Tea house', which is little bigger than a garden shed, to Craig, a former youth hostel in Torridon, which has two reception rooms on the ground floor and three bedrooms upstairs.

What should I expect on my first bothy expedition?  Bothy accommodation is very basic, and it's important to assume that there will be no facilities. This means no gas, electricity or a tap. You should only expect to find a windproof and water-tight building, with somewhere dry to sleep. If you are staying overnight, you will need to carry in all the equipment you would normally take camping, plus candles, and if there is a fireplace, fuel to burn. As a bare minimum, bothies will have a table and a couple of chairs, but many also have sleeping platforms and stoves. Water comes from a nearby stream, and although some bothies have latrines or loos, answering calls of nature will involve a walk and the use of a spade. Leave the bothy clean and tidy, and take away all your rubbish. As bothies are open shelters, you should anticipate company for the evening, but there is absolutely no concept of first come, first served. Except on extremely rare occasions, late comers will just squeeze in on the floor if the bothy is full, though it may be common sense to take a light-weight tent, if you are going to a bothy in a popular area at Easter and in the summer months.  Bothies can look romantic, but in reality they can be cold, dusty, damp, and pretty dark. Yet in the evening, with the fire blazing, candles burning, hot food on the table and a glass of wine at your elbow, the place is transformed.

Are bothies only found in Scotland? No the concept of bothies has caught the imagination, and they can now be found in England and Wales, and there are even a couple in Ireland. The biggest concentration outside Scotland is in Northumberland (a total of seven in close proximity within the national park), plus four in the Lake District and nine spread across the wilder regions of Wales.

Scotland is one of the most beautiful, scenic countries on earth...is there one place you think our readers really should visit?  There are soooo many fantastic places to visit, it's difficult to choose just one place to recommend. But if you twist my arm and I have to give a definitive answer, I'd recommend going to the island of Jura. The north-west coast of the island is as remote and inaccessible as any in Scotland, sculpted into a spectacular procession of quartzite cliffs, sea-stacks, caves and raised beaches. It is also home to a rich variety of wildlife which is very 'present', if you know what I mean, from golden eagles and hen harriers patrolling the skies, to otters and grey seals sheltering in secluded bays, as well as a large population of red deer and wild goats. Only four permanent buildings remain intact along a fifty mile stretch of coastline, three of them bothies - Glengarrisdale, Cruib and Ruantallain. It really has a wow factor which takes your breath away.

Now restrictions are lifting, where are you heading for your first adventure?   As with everyone who's been pining for the great outdoors, I'm itching to get out in the hills again. Bothies are still closed so I have dusted down my light-weight tent, and am planning a couple of summit camps. I'm working on a third bothy book, so I have a list of places to visit spread right across the country from Knoydart and the Rough Bounds to the Cairngorms National Park. There's a reveal at the end of the Zoom chat with Greg Hackett (the LMFF supremo) so I'll stop just there before I say too much!

Who's around your camp fire?  One person I would have loved to chat to is Irvine Butterfield. My copy of his seminal munros guide, The High Mountains of Britain and Ireland, is the most well-thumbed tome on my bookshelf. And the treasure trove of information contained in his Survey of Shelters in Remote Mountain Areas of the Scottish Highlands, published way back in 1972, spurred me on my own quest to discover the most mysterious and obscure bothy locations, which ultimately led to the idea of my first book, The Scottish Bothy Bible. An outstanding figure in the Scottish outdoor community for over 40 years, he was a founding member of the Mountaineering Council of Scotland (now Scottish Mountaineering), the John Muir Trust, and also an significant voice within the early incarnation of Mountain Bothies Association.

Bothy expert Geoff Allan, author of The Scottish Bothy Bible, has followed it up with a collection of his favourite walks which just happen to have a built-in Bothy stopover. Find out how to visit places you may never have otherwise known about, what to expect when you get there and the best routes to follow. The book includes Geoff’s own beautiful photographs which will further inspire you to give Bothying a go.  Find our full list of recommended adventure reads for the London Mountain Film Festival Bookfest 2021.

Other books by Geoff Allan