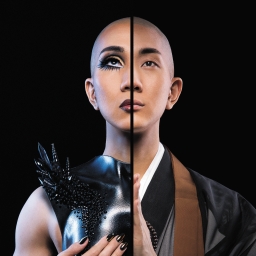 Kodo Nishimura is a Japanese Buddhist monk born in Tokyo in 1989. He graduated from the Parsons School of Design in New York. After graduating, he remained in the US to work as a make-up artist, where he participated in Miss Universe and NY Fashion Week, receiving high praise from international media and Hollywood actresses. After returning to Japan, Nishimura trained to be a monk and was ordained into the Pure Land sect in 2015. He holds make-up and LGBTQ awareness seminars. His lectures held at the United Nations Population Fund in New York, Yale University and Stanford University have attracted wide coverage on the likes of CNN and the BBC.

This Monk Wears Heels Be Who You Are

This inspirational book is a beautifully presented, beautifully written, heartfelt and emotional insight into Kodo's journey and is "for anyone who has ever struggled to be honest with their heart".  Kodo Nishimura is a Buddhist monk, a makeup artist and a member of the LGBTQ+ community, proudly and openly since he was 26. Having grown up in a Tokyo temple where his father was a priest with an expectation that one day he would take over the family business, he spent half of his life "at the bottom of a colourless pit." Watching back a video of when he was younger performing dance routines he realised he loved himself much more back then: "where had the little me gone?" Expectations around behaviour, gender roles, and the challenges of high school meant he never found a friend or teacher who truly knew him. Misery fuelled his desire to get away, and his love of American culture drove him to the US to study. At 24 Kodo returned to Japan to start his training to become a monk and decided to come out to his mum and dad, and for the first time in his life the "invisible spider web" hanging over his head disappeared, it was "like jumping into a pool of peach soda, I could see the stars." Kodo has learned various lessons to inspire others on their journey complemented by insights from ancient Buddhist teachings. With relatable advice, tangible actions, and ideas based in Buddhist scripture, this will make you see everything in a different light, a colourful, bright light of awakening. With passages from Buddhist scriptures including the Amida Sutra, a sacred Buddhist text, Kodo reminds us that each flower shines with its own colour and is uniquely beautiful. He highlights the similarities between Buddhism and makeup - and how his role is to bring out and protect each person's special colours and help them truly shine. And that he does.