The Wind between Two Worlds

The Wind between Two Worlds Synopsis

Young journalist Simon Peckham is seeing the New Year in at a London nightclub when he first notices Soraya, the daughter of an Iraqi refugee. His evening isn't going to plan, so he steps out to get some air and watches as paramedics attend to an old rough sleeper, Tom, in an alley close by. The next morning at the local hospital, Simon enquires after Tom's condition and is surprised to meet Soraya, who tells him that 3 men had assaulted both her and Tom, and that a second rough sleeper came to their rescue. Sifting through Tom's meagre possessions out the back of the club, Simon stumbles across a notebook, the entries in which are written in a curious code. Will he decipher it? What will it lead to? And why is Soraya keeping the second rough sleeper secret from the police? Peter Crawley has worked amongst rough sleepers and has interviewed many former servicemen and refugees to lend authenticity to the story. The Wind between Two Worlds is a gripping novel that twists and turns as its characters conceal and reveal in equal measure. Readers who enjoy clever plots, secretive characters and a modern, original storyline will delight in this well-researched, expertly-crafted book. 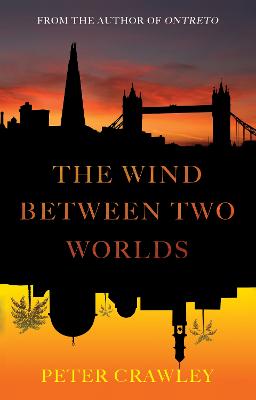 Peter Crawley was born in London in 1956 and educated at Cranleigh School and the Goethe Institut in Freiburg-im-Breisgau, Germany. He is a former transatlantic yachtsman, historic motor-racing driver and author of the novels Mazzeri, Ontreto, and Boarding House Reach, and The Truth in Fiction, a collection of short stories.