Suddenly everyone in the world loses consciousness for two minutes. Planes fall from the sky, there are millions of car crashes, millions die. And when everyone comes round they have had a glimpse of their life in the future. When it awakes the world must live with the knowledge of what is to come. Some saw themselves in new relationships, some saw exciting new technologies, some saw the stuff of nightmares. Some, young and old alike, saw nothing at all ... A desperate search to find out what has happened begins. Does the mosaic of visions offer a clue? What did you see? Now the basis for the Channel 5 hit series FLASHFORWARD

Sawyer focuses on the efforts of a small group of people to cope with their new found knowledge, showing what's going on for the rest of the world via news headlines. This gives the reader the opportunity to really get inside people's heads and experience the phenomenon at first hand... a thoughtful and exploratory piece that examines the nature of destiny and free will. * GRAEME'S FANTASY BOOK REVIEW * The novel, now published for the first time in this country, is... decent sci-fi. * THE EVENING STANDARD * Although it was turned for TV into a race-against-time thriller, the novel is an intellectual puzzle, drawing on theoretical physics to raise questions about time and space and the existence of free will, and proves once again that good science fiction does not need visual effects to thrill. -- Lisa Tuttle * THE TIMES * This is the novel that inspired the TV series. The book's cast indulges in more leisurely discussion of theories about free will, multiple universes and the like. It works rather well. There are some intriguing predictions for the year 2030, by the way: hover cars and an African-American president in the White House. * THE DAILY MAIL *

Robert J. Sawyer has been described as Canada's answer to Michael Crichton. Critically acclaimed in the US he is regarded as one of SF's most significant writers and his novels are regularly voted as fan's favourites. He lives in Canada. 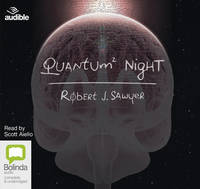