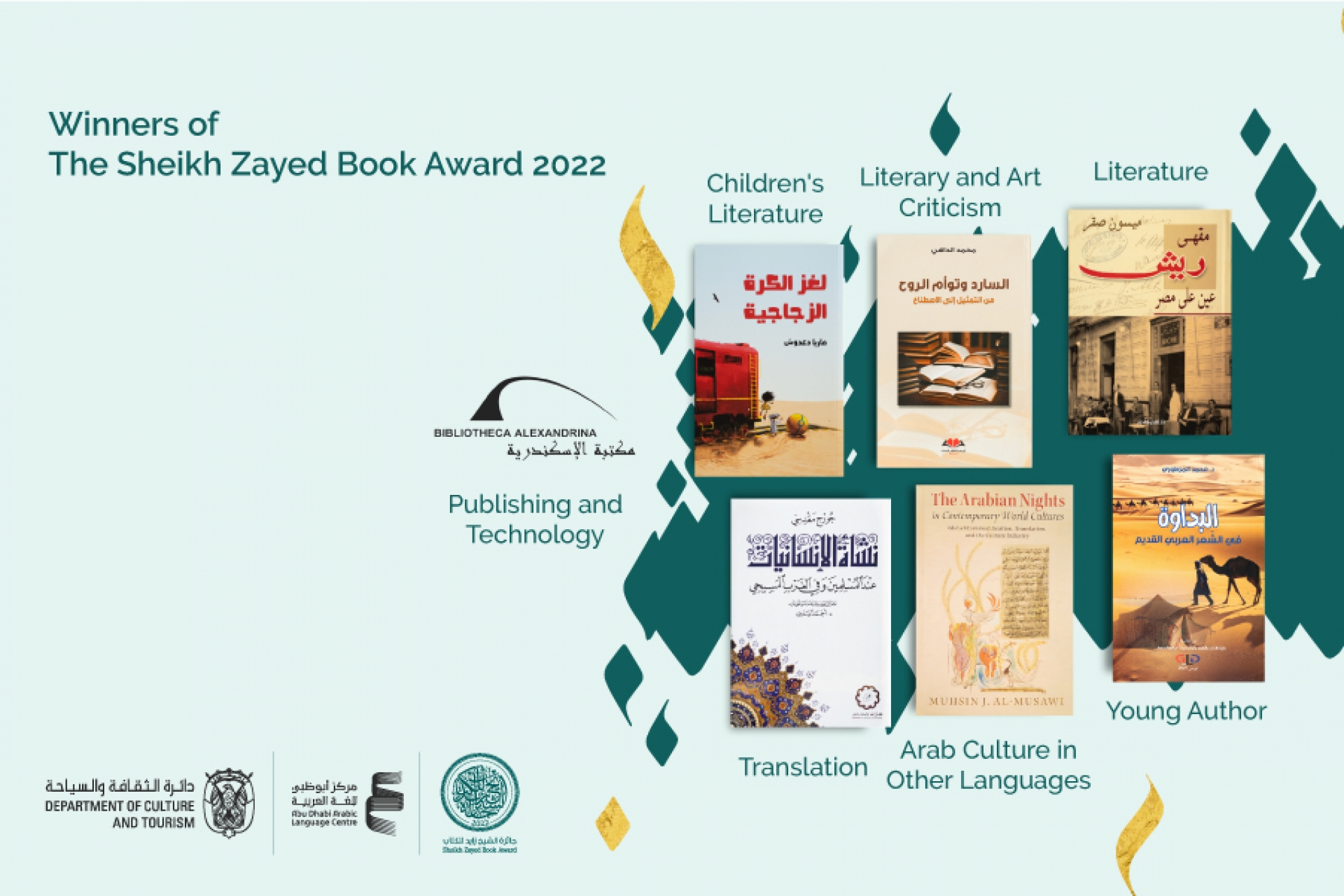 The Sheikh Zayed Book Award under the auspices of the Abu Dhabi Arabic Language Centre, has revealed the winners of its 16th edition. One of the Arab world’s most prestigious literary prizes, the Award announces laureates across seven key categories.

2022 saw a record-breaking year for submissions, with over 3000 entries from 55 countries this year - an impressive 28% increase in submissions compared to the previous edition of the awards. The awards have been described as the ‘Arab World’s equivalent of the Nobel Prize’ by children’s author and 2020 laureate Ibtisam Barakat, and this year recipients hail from the UAE, Tunisia, Egypt, Iraq/USA, Morocco and Syria.

The winners will each receive prize money of 750,000 UAE dirhams (165,220 GBP / 204,190 USD), an award designed both to recognise their achievements and support their ongoing work. The winning and shortlisted titles in the Children’s Literature and Literature categories will also be eligible for translation funding through the Award’s ongoing Translation Grant aimed at international publishers.

The awards will be presented at a ceremony at the Louvre Abu Dhabi on the 24th May, which coincides with the Abu Dhabi International Book Fair (May 23-29, 2022).

Dr Ali bin Tamim, Chairman of the Abu Dhabi Arabic Language Centre and Secretary-General of the Sheikh Zayed Book Award, said: “We are delighted to have had another record-breaking year of submissions which included rigorous research, creative authorship and authoritative publishing and programming. The work of this year’s laureates present remarkable intellectual, linguistic, and creative diversity and point to a thriving contemporary Arab literary scene. We are particularly pleased to showcase winners representing 7 countries around the world and to support Arabic culture on the world stage, by recognising and promoting the global advancement of Arabic literature and culture in both Arabic and non-Arabic languages.”

Literature was awarded to female Emirati author Maisoon Saqer for Maq’ha Reesh, Ain Ala Massr (Eye on Egypt: Café Riche) published by Nahdet Misr Publishing in 2021 , which centres on a legendary cafe in Cairo that was at the heart of Egypt’s social, political and cultural life in the 20th century. Through the colourful prism of a coffeehouse famously frequented by literati and artists, Saqer chronicles modern Egyptian history and tells the story of a place in the midst of transformation.

Arabic Culture in Other Languages was awarded to Iraqi-American academic Dr. Muhsin J. Al-Musawi for The Arabian Nights in Contemporary World Cultures: Global Commodification, Translation, and the Culture Industry (Cambridge University Press, 2021). Dr. Al-Musawi examines the enduring vogue of the Nights among writers, artists, musicians, filmmakers, and philosophers, from Marcel Proust to Walt Disney. He considers their translation and appropriation in the context of colonial legacies.

Children’s Literature was awarded to Syrian author Maria Daadoush, whose previous books The Fly Flew Over the Pond and Diary of a Martian Kid have been translated to English. She is awarded for Loghz al Kora al Zujajiya (The Mystery of the Glass Ball) published by Dar Al Saqi in 2021, which tells the tale of a young boy and girl who meet on a train ride in the desert and embark on a series of challenging adventures, confronting criminals set on destroying the ecological life of an oasis.

Young Author was awarded to Tunisian author Dr. Mohamed Al-Maztouri for Al Badawa fi al She’er al Arabi al Qadeem (Bedouinism in Ancient Arabic Poetry) published by Manouba University and the GLD Foundation in 2021. This critical text explores the influence of nomadism in ancient Arabic poetry, particularly looking at how imagery of the Arab desert translates into poetic form, and how poets have transcended stereotypical images of the desert as barren land.

Translation was awarded to Egyptian translator and author Dr. Ahmed Aladawi, for his translation from English into Arabic of Nash’at al Insaniyat Einda al Muslimeen wa fi al Gharb al Maseehi (The Rise of Humanism in Classical Islam and the Christian West) by the late George Makdisi which shows how Western thought has its roots in the mediaeval Isalmic world. Dr. Aladawi’s translation published by Madarat for Research and Publishing, 2021, was praised for balancing a faithfulness to the original text with a keenness to adhere to the spirit of the Arabic language.

Literary & Art Criticism was awarded to Moroccan author Mohamed Aldahi for Al Sarid wa Taw’am al Rooh: Min al Tamtheel ila al Istinaa’ (The Narrator and the Soulmate: From Acting to Faking) published by Le Centre Culturel du Livre, 2021. In this book, semiotician Aldahi examines the ever-evolving relationship between the author and the narrator in autobiographical texts such as diaries, letters and confessions from ancient to modern times. Considering reader expectations of this relationship throughout history, Aldahi explores the area between reality and imagination.

Publishing & Technology was awarded to The Bibliotheca Alexandrina (Egypt), a state-of-the-art library and cultural centre housing millions of books in multiple languages. The Sheikh Zayed Book Award particularly recognises the library’s extensive resources such as its digital archive, which caters to the needs of readers all over the world, and its Embassies of Knowledge initiative, which includes branches in universities across Egypt, providing resources for students and researchers without the need to travel to its headquarters in Alexandrina. Not only does the initiative provide books and journals, but it has also issued unique publications and offers a workshop programme led by leading intellectuals in person and online, hence enriching Arab culture and promoting it to the world.